Tim Howard, the starting goalkeeper for the U.S. soccer team in the upcoming World Cup, may be the most famous American player not playing professionally in the United States.

As an animal rights advocate and someone who has Tourette Syndrome, the soccer star serves as a role model for people everywhere. He started every game in the 2010 World Cup in South Africa and is poised to do the same next month in Brazil.

Howard is also one of the most popular players in the world. There’s an an array of Howard-related merchandise

out there, from iphone cases

Here’s what you need to know about Howard:

1. He Has Tourette Syndrome

Howard has any inspirational story that includes a tough childhood and a diagnosis of Tourette Syndrome. He talks about the “gift” of having Tourette in the video above.

In fifth grade, Howard was diagnosed with Tourette. The neurological disorder can cause involuntary movements and ticks, but for Howard it only made him focus harder.
Howard does not take medication for the disorder because it doesn’t allow him to be himself. He discussed his handling of the disorder and being known for “playing ugly” with Esquire Magazine.

Howard is a spokesman for Tourette’s awareness and serves as an inspiration for children going through the same difficulties he has. Involuntary cursing happens in 10 percent of cases, according to studies, but Howard does not suffer from the random outbursts.

In an interview with USA Today, Howard explained:

T.S. is part of my life. It’s like breathing to me. I don’t feel that I missed out on anything, and I still don’t take medication for it.”

Anxiety triggers the syndrome, increasing symptoms while he is in goal. Over the years, Howard has learned how to suppress it. He concentrates so hard in games that symptoms no longer affect his play.

2. He Was Raised in a One-Bedroom Apartment

US goalkeeper Tim Howard adjusts his gloves before the start of a World Cup preparation match. (Getty)

Matthew Howard was a long distance truck driver, but made an effort to be a part of Tim and his brother Chris‘ lives. He supported and encouraged them to play sports, buying whatever equipment he could afford that they might have needed.

Howard in 2003 with Manchester United. (Getty)

Tim was married to Tennessee native Laura Howard. They had two children, Jacob (8) and Olivia (7) before getting divorced in August 2010.

Laura currently lives in Memphis with their children.

Howard is an outspoken animal rights advocate who has worked in the past with People for the Ethical Treatment of Animals (PETA). Watch the video above for a sample of Howard’s work.

Howard’s torso and arms are completely covered with ink. Many of the tattoos represent his “Ink, Not Mink” campaign for PETA to spread awareness about animal abuse and suffering. In an interview with USA Today he said:

“Protecting animals is very important to me, and I think speaking out against fur is an amazing cause. When I see someone wearing fur, I just want to sit them down in front of one of PETA’s videos and show them just how badly animals suffer for this supposed fabric that no one needs.”

His other tattoos include Superman’s logo, his mother’s name, dragons and a cross, Chinese characters that represent God, family, faith, health, and happiness, all of which he hold their great importance to him in this particular order.

Howard’s career began with the North Jersey Imperials before he became a goalie for the New York Metro Stars. His performances enticed Manchester United’s goalkeeping coach Tony Coton in 2001, who signed him in 2003.

Howard was a part of Manchester United’s wins at the 2003 FA Community Shield, the 2003–04 FA Cup and the 2005–06 League Cup. When Man U signed Edwin van der Sar, Howard was loaned to Everton to play and ended up signed permanently with them in February 2007. Howard became the fourth goaltender in history to score a goal on January 4, 2012, against the Bolton Wanderers.

His net worth is currently $6 million with an annual salary of $2.6 million.

Nobody will get the ball by Tim Howard. Best goalie in the world. pic.twitter.com/Y8FR5bECoA

Howard was also a starter for the U.S. 2010 World Cup team. The U.S. victories in the 2010 World Cup to many have been attributed to Tim Howard according to ESPN. Howard’s incredible throwing arm gave hope to soccer fans around America in the 16th round when he placed the ball at Landon Donovan‘s feet from 40 yards away where he scored the goal that would advance the U.S. into the next round. 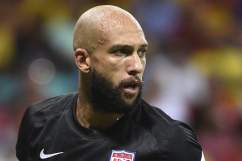 Loading more stories
wpDiscuz
3
0
Would love your thoughts, please comment.x
()
x
| Reply
Everything you need to know about U.S. national soccer team goalkeeper Tim Howard, one of the most well-known American players in the world.