Miners are helped by rescue workers and friends on May 14 in Soma, Manisa, Turkey. (Getty)

An explosion deep within a large privately owned coal mine has caused one of the biggest mining disasters in Turkey’s history. As the death toll climbs, rescue workers are scrambling to uncover any potential survivors in shafts that run miles into the ground below Soma in Turkey’s Manisa province.

Around 9 a.m. Eastern Time on Wednesday, Turkish Prime Minister Reccep Tyyip Erdogan confirmed that the death count in the Soma mine disaster is now 238 people, with 80 injured. The number of dead is expected to increase as rescue operations continue.

According to Turkish authorities, most of the deaths were caused by carbon monoxide poisoning. 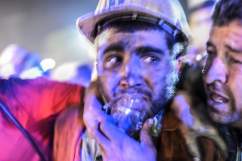 2. 787 People Were Inside the Mine, & Hundreds Might Still Be Trapped

According to Taner Yildiz, Turkey’s Energy Minister, 787 people were working inside the mine when a massive explosion rocked the mine and severed power. With no power to work the ventilation system or the elevators, miners were trapped deep inside the mine without access to fresh air and subjected to rising carbon monoxide levels. Miners are believed to be trapped about 400 meters down.

According to the Turkish Prime Minister, the revised estimate is that 120 workers remain trapped somewhere in the mine.

3. An Electrical Explosion Occurred About 2 Kilometers Inside the Mine

Smoke billows from the coal mine on May 14 in Soma, Manisa, Turkey. (Getty)

Turkish Authorities believe the large blast that rocked the mine was caused by an “electrical fault” around 2 kilometers into the mine. It is also possible that the explosion caused coal in the mine to begin to burn, increasing the carbon monoxide levels and decreasing the amount of oxygen deep inside the mine.

Each miner is equipped with a gas mask, but it is unclear how long this precaution will be sufficient.

4. 400 People Are Involved in the Rescue Operation

Around 400 people are working in conjunction with the rescue operation. Al Jazeera reports that paramedics, firefighters and many civilians are involved.

Many rescuers helped by pumping clean air into the mine.

The Turkish mining industry has been plagued with accidents and incidents in the past 20 years. Before the Turkish coal industry took off in the early 2000s, between 1994 and 2003, the Oxford Journal for Occupational Medicine recorded 164 deaths in Turkish mines. In 1992, 263 miners were killed in a gas explosion in Zonguldak. More recently, eight miners were killed in northern Turkey after a believed methane gas explosion.

Read More
Breaking News, Turkey
In Turkey, an explosion in a coal mine killed over 200 miners and left hundreds trapped. Rescue missions are underway. Here is what you need to know.