Neil Moore, 59, has been named by authorities as the main suspect in the VA Medical Center in Dayton, Ohio shooting on May 5.

Here’s what you need to need to know:

1. He Used to Work at the Hospital

Moore is a former housekeeping employee at the VA hospital. Local police chief Richard Biehl told the media that he believes the suspect went to the Medical Center with the intention of doing harm. Cops have not released a possible motive for the crime.

2. The Victim Was Shot in the Ankle

The shooting victim has also been named as Paul Burnside, 61. He was shot once during the attack. He is being treated for non-life threatening injuries at the VA hospital. Moore was named during a press conference at the medical center. It’s understood that Burnside was shot while he fought with the suspect. He’s reported to have been shot in the ankle.

3. Cops Think Moore and Burnside Knew Each Other

Police believe that Moore and Burnside probably knew each other. Police have three witnesses to the fight that led to Burnside being shot.

Moore was brought to the Good Samaritan hospital after the shooting by his sister. It’s not known how he left the VA Medical Center. Cops think that he went to his sister who in-turn brought him to the hospital. According to authorities, Moore was seeking psychiatric help at Good Samaritan.

5. A Revolver Was Found in Moore’s Car

The suspect was armed with a revolver. It was found in Moore’s car after his arrest. According to public records, Neil Moore lives at 6711 Shadowbrook Drive in Dayton (above).

On the scene at Neil Moore's home where his daughter tells me family will make a statement in an hour. #BREAKING pic.twitter.com/ryZsOi4jPm 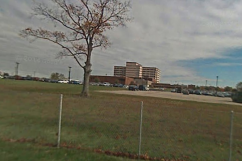