Vito Cammisano is the boyfriend of Missouri defensive end Michael Sam, who became the first openly gay player drafted by an NFL team when the St. Louis Rams took him in the seventh round on Saturday.

Cammisano was watching the draft with Sam, and ESPN cameras showed the two celebrating with a kiss when Sam was drafted.

Here’s what you need to know about Cammisano:

1. He Was a Swimmer at Mizzou

Like Sam, Cammisano was an athlete at Mizzou. He was on the University of Missouri’s swim team from 2009-2012 after starring at Rockhurtst High School in Kansas City and for the Kansas City Blazers.

According to his bio on the Mizzou athletics site, Cammisano placed fifth in the 1,650 freestyle and 10th in the 500 freestyle consolation event at the Big 12 conference championships as a freshman in 2009-10.

After Sam came out as gay in February, Cammisano was quoted in an interview with the Columbia Missourian talking about Greg DeStephen, a gay swimmer who came out in 2008:

I’m completely appreciative that Greg did everything he could to make that possible for people that came after him.

Cammisano told the paper he received no anti-gay sentiment after coming out on the swim team in 2011.

2. He’s the Grandson of an Infamous Mob Boss

William, known as a ruthless enforcer, was a prominent member of the Kansas City Crime Family.

He was already doing time for extortion in 1981 when he received a further sentence for refusing to testify for a 1980 Senate hearing.

At the same hearing, Fred Harvey Bonadonna, who claimed his dad was murdered by William, said, “Willie was called Willie the Rat because he killed people and stuck them in the sewers so the rats could eat them,” reports the Daily News.

William’s sons, William Jr., who is Vito’s uncle, and Gerlarmo “Jerry” Cammisano, Vito’s dad, were sentenced to federal prison in 2011 for their part in running a $3.5 million illegal sports betting ring.

3. He Interns at Cumulus Media

Cammisano is an intern at radio giant Cumulus Media, which is the second biggest radio owner and operator in the country, trailing only Clear Channel Communications.

As America’s second largest operator of radio stations, Cumulus provides high-impact local marketing solutions in 110 metropolitan areas. We introduce businesses of all sizes to our communities of over 150 million listeners via radio, digital media, targeted e-mail and on-site promotions. These solutions help our customers build strong brands and tap into over $4 Trillion of local spending power.

4. He Was Watching the Draft With Sam, and the 2 Kissed to Celebrate the Pick

Cammisano and Sam enjoyed an emotional embrace after Sam found out he was being picked. You can watch it above and read more about it here.

5. Missouri Does Not Recognize Same-Sex Marriages

Missouri is not one of the 18 states that recognize same-sex marriage, though support for gay marriage is growing rapidly in the Show Me State, as it is elsewhere throughout the country. (Fivethirtyeight.com’s Nate Silver wrote in a post about the Rams drafting Sam that he estimates 47 percent of Missouri voters support gay marriage.)

A state constitutional amendment passed in 2004 prohibits same-sex marriage, but the American Civil Liberties Union has filed litigation challenging the legality of the amendment.

Michael Sam Comes Out as Gay: All the Photos You Need to See 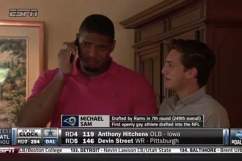 WATCH: Michael Sam Kisses Boyfriend After Being Drafted by Rams

Loading more stories
wpDiscuz
0
0
Would love your thoughts, please comment.x
()
x
| Reply
Vito Cammisano is the boyfriend of Michael Sam, who was just drafted by the the St. Louis Rams in the seventh round of the NFL draft.