Jordan: Angry pundits wreck TV studio on airTwo pundits taking part in a Jordanian TV debate about media freedom in the Arab Spring became so angry with each other that they wrecked the studio on air. Journalists Muhammad Sharif al-Jiyusi (left) and Shakir al-Johari (right) were mid-way through a discussion on the Jordanian 7 Stars TV network when the tone became heated.…2014-05-07T15:33:11.000Z

When two journalists agreed to appear on Jordan’s 7 Stars TV network to discuss media freedom and the Arab Spring, they had no idea how heated it would get. In the video above, journalists Muhammad Sharif al-Jiyusi (left) and Shakir al-Johar (right), are debating when they exchange some harsh language, according to the BBC. Then someone makes a move and pushes the table hard, causing the entire thing to fall apart. At one point, Shakir al-Johar tries to get close enough to kick his opponent under the table. 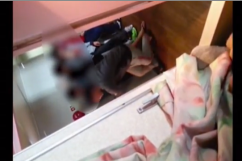