If anyone has the deets, share! "@evankpogue: Looks like Westboro Baptist is going to picket Maya Angelou's funeral" pic.twitter.com/ZqZCIlJtMt

The Westboro Baptist Church members are famous for their picketing of funerals of great and brave people. Now the hateful holy rollers from Topeka, Kansas, have asked their Twitter followers for information on Maya Angelou’s funeral.

Celebrated author Angelou died on May 28 at the age of 86. Her life has been lauded by everyone, except for the monsters from Westboro. Via its various Twitter accounts the monsters spent most of their day tweeting hateful nonsense about Angelou.

WBC preached to Maya before? She has no excuse! "@kansasdotcom: Library will ring w/ Angelou http://t.co/wWDyAgZw5C" pic.twitter.com/3lEd64B2DS

#mayaangelou spent many of her 86 yrs on fag's favorite misdirection, pretending fagging off is like being black. https://t.co/uM0Ly0ieEK 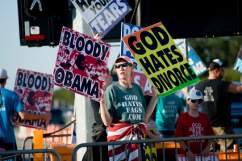