Here’s what you need to know about Kuhn and his ex-girlfriend.

1. The Married Allbaugh Wanted to Teach the ‘Selfish Pompous A**hole’ Kuhn a Lesson

After Kuhn split with Allbaugh, she wanted revenge for the breakup, according to Politico. The self-described “disgruntled former girlfriend” told Politico reporter John Bresnahan in a direct Twitter message that she “just wanted to teach the pompous a**hole a lesson.”

The former adult film star and free speech activist confessed she loved Kuhn and her husband at the same time. “I was trying to make him hate me, I guess,” Allbaugh said.

Along with the picture of Kuhn’s genitals, Allbaugh tweeted, “I hate you, AJK, you selfish pompous a—hole.” She added, “Now we’re even,” according to Politico.

Kuhn worked on Stivers’ successful Congressional campaign in 2010 as campaign manager, according to Politico. In January 2011, Stivers made him deputy chief of staff and promoted him to chief of staff two years later.

Congressman Stivers accepted Adam Kuhn’s resignation today. The office is not commenting on his personal life.

3. Kuhn Made a ‘Poor Judgment’ Call

Kuhn accepted responsibility for falling prey to the Twitter attack. He sent a statement directly to Politico expressing his regret:

Allbaugh quit the adult film industry to raise her a family about six years ago. She lives in Fairlawn, Ohio, which is not located in Stivers’ district. She works at Sam’s Hideaway in Medina, Ohio as the the Head Entertainer, according to her now-deleted Twitter page.

5. Allbaugh’s Husband Served in the Military

This cause is very close to my heart because hubby’s at war right now. You have to keep it alive at home. [The Free Speech Coalition is] doing a lot of important work and we’re definitely policing the House and the Senate and keeping them in line. 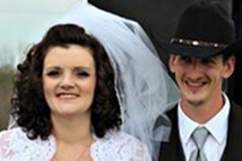 Andrew and Chapel: 5 Fast Facts You Need to Know