Alyn Beck and Igor Soldo are the two Las Vegas police officers who were shot and killed in an ambush on a North Vegas pizza restaurant Sunday morning.

Beck and Soldo had been with the force for 13 and eight years, respectively. The ambush, which spilled over into a Walmart across the street, also left one civilian dead.

Here’s what you need to know about Beck and Soldo:

1. They Both Leave Behind Wives & Young Families

In a post on CNN’s opinion page adapted from her blog, Alyn Beck’s friend Tracy Smith blogged about her memories of her friendship with Beck and the cowardice of those responsible for his and Soldo’s death. She writes:

These two didn’t start a revolution. They just took the lives of two heroes. They tore fathers from children and turned wives into widows. They brought darkness into the lives of all who loved these two men and another bystander. They traumatized people who witnessed the tragedy.

My friend, Alyn, was a dynamite guy. He was a riot to be around: kind and funny, capable of ridiculously juvenile behavior but also profound intellectual depth. Alyn helped me build the shed in my backyard. He insisted on helping. He was a tireless worker, and once he was done with a job, he’d be the one bringing you a lemonade.

Alyn was a family man, a devoted husband and dad, and with the birth of a daughter, he was relishing the joy of being a new father again after over a decade of raising his first two wonderful kids. He liked to swim with his kids in the backyard. He loved going dancing in clubs with his wife. He was remarkably patient in training and tolerating the family’s lovable but absolutely insane dog, Marty.

According to KMTV, Soldo grew up in Nebraska and worked as a corrections officer in the Lancaster County, Nebraska jail before moving to Nevada. Soldo came to America as a refugee from the Bosnian wars of the 1990s and learned English at school. Scott Bykerk, a former co-worker of Soldo’s, said of Soldo’s character, “If there was a bad situation going on, you knew you could count on Igor to have your back,” KMTV reports.

2. People Are Fundraising for the Officers’ Families

A fundraising page on YouCaring.com was created by a friend of Soldo’s, Arna Keesmate, to raise money for Beck and Soldo’s surviving family members. The fundraiser hopes to raise $20,000 for the families in the next six days and had raised $1,300 as of Tuesday morning.

3. They Were Eating Lunch When They Were Attacked

Beck and Soldo, who were partners on the force, were eating lunch at a Cici’s Pizza Restaurant when two shooters entered the restaurant, yelled “This is the start of a revolution,” shot the two officers and then draped their bodies with cloth featuring a flag from the Revolutionary War, according to the Las Vegas Review-Journal.

4. The Sheriff Called Sunday an ‘Unprecedented’ Day of Sadness

Gillespie said the scene is still “dynamic” and there are a lot of questions he won’t be able to answer immediately. The emotional sheriff said Sunday was an “unprecedented day” in the department’s history.

He described a department overcome with sorrow after the officers’ deaths:

My officers were simply having lunch when the shooting started. As I said before, ongoing investigation, many unanswered questions, some of which I’ll be able to answer for you today, but I’m sure many of them I will not. I say to the community and I say to my officers: It’s a tragic day. It’s a very, very difficult day. But we still have a community to protect. We will be out there with our heads held high, but an emptiness in our hearts.

Watch the news conference in the video above.

5. People Have Begun Mourning the Deaths of Beck and Soldo

The Las Vegas Review-Journal reports locals held a vigil outside the Cici’s Pizza where Beck and Soldo were shot on Sunday. Charles Dunn, a longtime area resident, told the Review-Journal:

It’s just senseless, totally senseless. How could someone go in and kill someone else on their lunch break? … We need to stop fighting one another, because there are kids going to bed tonight without a father and, to me, it just doesn’t make any sense.

People have also taken to Twitter to express their grief over the deaths of Beck and Soldo. Here are some of the tweets you need to see:

"Let those who come after, see to it that these names be not forgotten" Officers Igor Soldo & Alyn Beck @LVMPD pic.twitter.com/BsJ8By6qSb

Heartbreaking day for @LVMPD and the friends & families of Officers Alyn Beck & Igor Soldo….may they rest in peace. pic.twitter.com/ZHaqcF4Yof 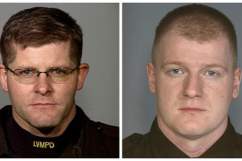 Loading more stories
wpDiscuz
1
0
Would love your thoughts, please comment.x
()
x
| Reply
Alyn Beck and Igor Soldo are the two Las Vegas police officers who were ambushed and killed in North Vegas on Sunday morning. The ambush also left one civilian dead in a Walmart across the street.