After years of debate over the offensive name of the NFL’s Washington Redskins, Native American activists are voicing their concerns to the more than 26 million viewers of the NBA finals.

Sponsored by the Yocha Dehe Wintun Nation in northern California, an ad titled “Proud to Be,” which you can watch above, shows how Native Americans go by many names and have many identities, but none of those is “Redskins.”

The ad will run during Tuesday night’s NBA finals and was deemed a “significant investment.” Chairman Marshal McKay, one of the Yocha Dehe leaders, told the Washington Post, “It’s just time to get people thinking about putting an end to outward hatred and using sports as a tool to focus on racism.”

In October 2013, a neighbor of Redskins’ owner Dan Snyder registered the company name “Washington Bravehearts” with the federal government, prompting rumors that a name change was imminent. Little has been heard about this since. 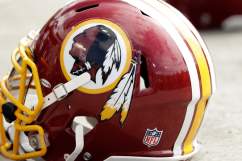 Read More
Breaking News, NBA, NFL, Racism, Sports
The Yocha Dehe Wintun Nation in California has sponsored the "Proud to Be" anti-Washington Redskins ad to run during the NBA finals.