That’s it! Argentina get the 2-1 win to start the World Cup off in the right fashion.

Into stoppage time with the game nice and stretched. Bosnia throwing players forward, Argentina look dangerous of the break. Messi whacked a chance into the side netting.

Here’s the video of the magic moment from Vedad Ibisevic:

Medunjanin has a wild shot that goes over from about 25 yards out. Not sure why he hit it, Bosnia had players in the box.

GOAL! Vedad Ibisevic, a substitute, scores Bosnia’s first ever World Cup goal. An absolutely moment, Lulic put him through for a one on one and the striker rolled it under Sergio Romero. GAME ON! Watch the magic moment here:

Poor Bosnia look out of ideas, Argentina are getting in behind them through Messi and Aguero everytime they break.

A GIF of the most amazing moment of the World Cup so far:

Medunjanin comes in for Bosnia as they look to change the flow of the game. Argentina looks pretty comfortable right now.

Višća, the lightening fast striker, is coming in for Bosnia.

GOAL! Lionel Messi with a majestic goal! He skipped around four Bosnia players before burying the ball in the left corner of Begovic’s goal. Simply wonderful.

Lionel Messi blasts a free kick way over the bar. It was a difficult distance, there was better options for him.

He should be a lot of people’s new favorite player after this:

Some pictures are worth a thousand words:

A photo can speak a thousand words… pic.twitter.com/AfxwXSsWML

Messi and Aguero team up to give Argentina a good chance, it was Aguero who got off a low shot that was saved and held by Begovic.

Bosnia has the momentum now. Creating confusion among Argentina’s defenders. Eventually their attack breaks down after a rash ball from Lulić give Argentina a goal kick.

Some lovely soccer saw Messi thread the ball across the Bosnia penalty area straight to Aguero but the Manchester City’s striker’s shot was totally wayward.

Hajrović gets another shot on Romero but once again it’s straight at Romero.

Rojo just did a rabona inside his own box! That is what the World Cup is about.

Bosnia free kick in a dangerous central area from Hajrović goes straight at Romero. A good kick, Hajrović got it easily around the Argentina wall.

There’s a party ongoing in Rio among Argentina fans. (Getty)

Bosnia has started the second half the way the ended the first, trying to get on the ball, composed passing.

Fernando Gago and Gonzalo Higuain are coming on for Argentina. Maxi Rodriguez and Hugo Campagnaro are the unlucky players who are coming out.

Half-time and it’s 1-0 to Argentina after an early own-goal. A cagey game so far with Bosnia playing well for the most part and frustrating Messi and co.

Coming up on the end of the first half and Lionel Messi just drove into the Bosnia box but once again he’s crowded out. Messi has been the only Argentina attacker who has been trying to do something. Di Maria and Aguero have been so quiet.

Bizarre shot from Bešić when there were plenty of options. It breaks down a decent Bosnia possession. Shame too, Bešić has been brilliant so far.

I think Maxi Rodriguez still gets picked because of this:

Bosnia’s best chance come from a header from Lulic, Romero pulls off a good save. The attack eventually breaks down.

Dzeko turns nicely on the ball but hits a wild shot over the bar. He seems isolated at the top of the field for Bosnia.

Mascherano has a good shot saved, decent technique but straight at Begovic. He can’t hold it though, thankfully Bosnia had enough players back to get rid of it.

Maxi Rodriguez has a shot in anger from about 30 yards. He seemed frustrated by the amount of Bosnia defenders facing him. Shot goes well over.

The first yellow card is handed down to Rojo for a foul on Mujdza. Seemed a bit harsh, and Roberto Martinez agrees with me. The resulting free kick causes panic for Argentina but they survive.

Pablo Zabaleta is venturing forward to supplement the Argentina attack. They need to get as many players as possible up there.

Here’s the long-awaited video of Kolasinac’s own goal that gives Argentina the lead:

The first dribbling play from Messi sees him wander into the Bosnia box. He’s crowded out, Bosnia is playing very deep, it looks like they’re petrified of the counter-attack.

Here’s another look at Argentina’s opener:

Free kick hits the wall and the attack breaks down.

So close for Bosnia! After some competent passing, somehow Misimović got one-and-one with Romero, the goalkeeper got the better of him on that occasion. Misimović just couldn’t control it. Pjanic free kick coming up.

Just about hit the ten minute mark here in the Maracana. Bosnia has come back into this game in a big way. Were it not for the goal they would probably look on this as a perfect start.

Bosnia’s first spell of pressure after a Misimovic free kick results in a corner. It was taken short, the eventual cross was punched away by Romero in the Argentina goal. He looks shaky.

Despite the early lead, Argentina are not letting up. They’re still attacking early on. A Lionel Messi corner caused some problems after five minutes. The pressure was relieved by Dzeko.

GOAL! Kolasinac puts it into his own goal from a Lionel Messi free kick that was floated into the box. The free came after a heavy challenge by Mujdza on Sergio Aguero. What a start for Argentina? You can see Argentina’s opening goal here:

Surprised that both teams are wearing their home jerseys. Both in blue, a slight clash.

Despite all the talk of Bosnia’s attacking prowess, Dzeko is playing upfront on his own. As for Argentina, they’re all about the attack. Do not expect a Maldini-esque defense masterclass tonight.

This is Bosnia’s first ever game at a World Cup finals. This is Argentina’s 9,000th. The stadium announcer just said that it’s the Maracana’s 64th birthday tomorrow. I didn’t get it anything. The pre-game formalities are just about over and we’re good to go here!

Let’s get this show started with the team news:

Both teams are out warming up before the big kick off. Just a reminder, this is Messi playing in the Maracana. Potentially one of the greatest moments in World Cup history.

It’s Argentina against Bosnia-Herzegovina in Group F of the 2014 World Cup tonight in Rio. You can stick with Heavy all throughout the game to get the best video, highlights, and photos from the game. The game begins at 6:00 p.m. Eastern time. 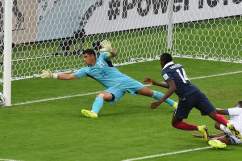 VIDEO: Noel Valladares Scores On Himself

Read More
Breaking News, Soccer, Sports, World Cup
Follow Heavy ↓
This is supposed to be Messi's prime, can he rise to the challenge?