Audrey Zhang is the 11-year-old winner of the 2014 Doodle 4 Google contest, which asks contestants to draw a doodle of an invention that could make the world a better place. Zhang’s drawing, titled “Back to Mother Nature,” depicts a futuristic water purifier complete with animation, a first for the Doodle 4 Google contest.

Here’s what you need to know about Zhang:

1. She’s Been a Finalist in the Contest for the Last Three Years

Zhang has been a finalist in the Doodle for Google contest for the last three years. The contest typically receives more than 100,000 submissions each year, which are then narrowed down to 250 semi-finalists, 50 finalists with one doodle from each state, then one final winner. The video above from a local newscast shows the story behind Audrey’s second year as a finalist in 2013.

Zhang lives in Levittown, New York, on Long Island. She attends The Island Trees Memorial Middle School in Nassau County. Part of her prize for winning the Doodle 4 Google contest is a $50,000 Google for Technology grant for her school. Zhang also went home with a $30,000 college scholarship.

3. Her Doodle Was Inspired by a Lack of Clean Drinking Water Worldwide

With this year’s contest prompt being, “If I could invent one thing to make the world a better place,” Zhang told Google her doodle was of a “transformative water purifier” which could quickly turn dirty water into clean drinking water. She said she came up with the design when she learned not everyone in the world has clean water to drink. Because of Zhang’s win, Google is donating $20,000 in her name to Charity: Water, which works to bring clean drinking water to people across the globe. An anonymous donor was so moved by Zhang’s drawing that they matched Google’s donation to charity: water, bringing the donation to $40,000, according to the NY Daily News.

4. Her Design is the First Doodle 4 Google Winner to be Animated

Zhang’s doodle is the first Doodle 4 Google winner to be animated. According to Google, “We quickly lost count of all the delightful elements of Audrey’s doodle. So in the spirit of this year’s theme, we asked Audrey to spend a day with the doodlers to turn her illustration into a moving animation.”

A Google spokesperson told the NY Daily News the company wanted to be “a little more ambitious this year” in regard to the capabilities of the winning doodle.

5. Her Win Was Almost Too Exciting for Her to Handle

Zhang told the NY Daily News she was so excited about her win that she almost tripped while walking up to the stage to accept her award. Her mom, Hongmei Weng, said she was having trouble keeping her hands steady while filming her daughter walking up on stage. 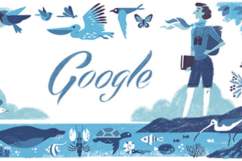