Oh God, this got me excited. “The Game Before The Game” is Beats headphones new ad campaign for the World Cup 2014. There’s no doubt that Brazil’s superstar, Neymar, is the star of the commercial. The video begins with him talking to his father about the upcoming World Cup, which begins on June 12 with Brazil taking on Croatia.

The ad moves on to show the cream of the world’s soccer talent all wearing Beats headphones as they prepare for games. What I like about this is that all of these players really do wear Beats headphones before games. Starring alongside Neymar are: Bacary Sagna, Bastian Schweinsteiger, Blaise Matuidi, Cesc Fàbregas, Daniel Sturridge, Chicharito, Jozy Altidore, Luis Suárez, Mario Götze, and Robin van Persie.

The song that rocks in the background is “Jungle” by X Ambassadors and Jamie N Commons. 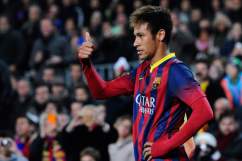