Brady Aiken (@bradyaiken10) could be the No. 1 pick in tonight's #MLBDraft. @keithlaw breaks him down: http://t.co/Hdwz7kdeWy

Brady Aikman is a 17-year-old pitcher who has just been drafted as the No. 1 overall pick in the MLB Draft by the Houston Astros. The lefty is known for his 98 mph pitches and consistency. Watch the video above to see a breakdown and analysis of the talented high schooler.

The Houston Astros chose the 6 foot 4, 200 pound pitcher in the first round of the MLB Draft, making him the first overall pick. The 17 year old attended Cathedral Catholic High School in San Diego, California.

2. He Was Drafted Out of High School

Aiken is now the third high school lefty to ever be chosen first overall. He led the U-18 USA baseball team to the championship against Japan. Aiken let up five hits and one run in 7 innings. He walked two players the whole game and struck out 10.

It is rare that a lefty pitcher is chosen as the first pick overall, proving how valuable he has shown his abilities are.

There have been two other left handed pitchers chosen first overall, Brien Taylor, drafted by the New York Yankees in 1991 and David Clyde drafted by the Texas Rangers in 1973.

Unfortunately, these two ended up being considered as failures of a first draft pick, not contributing much to the teams that chose them. The Astros need as much help as they can get, with a record of more than 100 losses in 3 straight seasons.

“Brady has a very unique combination of amazing talent that gets demonstrated every time he pitches and a great head on his shoulders. He’s handled all the attention and the pressure as good as I’ve ever seen a 17-year-old kid handle it.”

Aiken is know for his ability to perform moreso at the end of the game, when most other pitchers start to fall short and get tired.

3. He Modeled His Pitching Style After David Price

Aiken told media that he looks up to David Price as a pitcher. His mechanics, delivery and advanced hard slider is considered consistent and solid, just like David Price.

Aiken’s work on the mound is never done. He’s developed one of the best curveballs in the Draft to complement a fastball that tops out at 98 mph. Aiken keeps the curveball tight, with a late, sharp bite, making it almost impossible to hit when located.”

Aiken’s pitches clock up to 98 mph on average.

Aiken grew up in San Diego, California. He enjoys many sports, but finds surfing to be his favorite pastime according to an interview with MLB Network. Although he is constantly training for baseball, he occasionally gets the chance to ride the waves. Watch the video above to see Aiken’s daily routine. 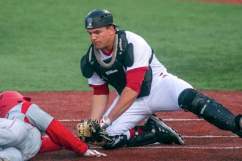 Read More
5 Fast Facts, MLB, MLB Draft, Sports
17-year-old Brady Aiken was chosen by the Houston Astros as the No. 1 overall pick in the draft. Here's what you need to know about the talented pitcher.