Final score is 3-1 to Brazil. Job done for the Selecao, they will need to improve as the tournament goes on. Croatian goalkeeper Stipe Pletikosa should have done better with this. Oscar’s late goal sealed the win for Brazil.

Neymar will have to improve his penalty technique too, c’mon Pletikosa. It was a shocking dive from Fred that gave the penalty in the first place. 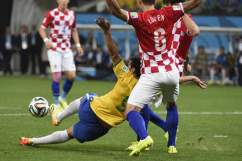 Foul on Fred: The Memes & Parody Vines You Need to See

Looking back now, Neymar’s first goal probably should have been saved by Pletikosa too.

Marcelo’s own goal made it 1-0 to Brazil and brought back memories of Andres Escobar in the 1994 World Cup.

The 3-1 scoreline is not a fair reflection of this game.

GOAL Oscar! Running through the stretched Croatian defense, an outside of the boot shot goes past Pletikosa.

Lets have another look at the “foul” on Fred for the World Cup:

Long corner into the Brazilian box finds Corluka in tons of space but he sends his header wide.

Brazil make a defensive substitution as Ramires comes on for Neymar.

Seriously, what was going on with this call by the ref?

Corner from Rakitic is flicked on dangerously but Brazil get another weak decision to clear the ball.

Not sure what happened there but a lofted in ball results in a “foul” by Olic on Julio Cesar. But it never was. Croatia robbed of a goal.

Neymar corner is headed dangerously across the goal by Fred but it goes out for a throw-in on the other side.

Croatia are in tough place, they nearly got destroyed on a Neymar breakaway run, but they also need to get players forward to get back in this game.

David Luiz misses a point blank header after a great cross from Oscar. Croatia are pissed at the ref, Yuichi Nishimura. Luiz looked like he fouled on the way to the header.

What a crazy call?

Neymar scores the penalty after Fred dived to win it. Stipe Pletikosa nearly saved it, should have saved it. Seriously lucky penalty all round.

Another change for Brazil, the quiet Hulk is replaced by Bernard.

The resulting free kick from the Corluka challenge is taken by Dani Alves, poor effort, flies over.

Yellow card for Croatia defender Corluka as he hammers into Neymar. Could have been a lot worse for Neymar…Corluka lucky to stay on the field.

Inter Milan midfielder Hernanes comes on for Paulinho for Brazil. Seriously, how lucky is Paulinho to be in this team?

The first substitution is taking place as Brozovic comes on for Kovacic for Croatia.

Ivica Olic and Jelavic have a brief argument the Hull player misjudges his run.

A positive Brazil move seemed to get the crowd going breaks down when Neymar overcooks a pass to Oscar, sending it out for a throw.

Croatia stringing some passes together for the first time in this half. We’re nearly ten minutes into the second here. The Croats have had just 7% possession in this half. Playing a dangerous game.

Ball is cleared by Croatia, a counter-attack led by Modric is broken down but Brazil get it back.

Brazil’s Oscar tried to get away from the Croatian defense. Dangerous free kick coming up as a result for Brazil.

According to the great Jonathan Wilson, some of the doves that were released during the opening ceremony have run into trouble:

Errrr, think one of those doves is dead already. Flew straight into stand and went down.

Croatia starting the second half how they ended the first. Playing very deep in their own half…letting Brazil have the ball. Bad idea.

And we’re off again.

Did Neymar deserve more than a yellow card for this forearm on Modric?

How much do Brazilian fans wish they could call on this man right now?

At the half, let’s take a look at the Marcelo own-goal again:

A free kick after Jelavic challenge, a quick breaks down for Brazil. Croatia looking desperate to get to halftime with at 1-1.

Once again Olic’s skills get Croatia into trouble and Neymar wanders into Croatia’s box. He was successfully tackled and Hulk whacked the breaking ball over the bar.

Neymar steps up for a free kick. Hits the wall.

Coming up on half time now, Croatia seemed to have calmed down again since Neymar’s goal.

Tragic to see that Andres Escobar’s name is trending on Twitter after Marcelo’s own goal.

Just a reminder, the referee today is Yuichi Nishimura, read more about him here: 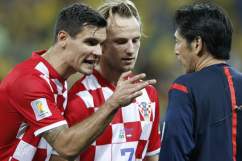 Pletikosa comes for a Neymar corner and claimed it pretty easily. Brazil definitely playing at higher-tempo since Neymar’s goal.

The ball fizzed through the Croatian defense, was buried in the corner passed Pletikosa.

A Jelavic header from a Rakitic cross forces Julio Cesar into a simple save.

Wow! Neymar gets the first yellow card of the tournament. He stuck his forearm into Luka Modric’s face.

Croatia fans in Zagreb are enjoying what they’re seeing so far:

Amazing bit of play from Brazil, they’ve really come to life in the last few minutes. Oscar pulls a great save out of Pletikosa.

Marcelo, trying to make amends for his earlier mistake, tries to fire it across the the box but Pletikosa picks it up

Paulinho gets in for a good chance but fires straight at Pletikosa.

GOAL! Terrible error from Marcelo as he puts into his own net and makes it 1-0 to Croatia. Shocking stuff.

Brazil chipping in a corner from Neymar but it results in a break from Luka Modric.

Hulk didn’t look too impressed by Corluka’s challenge. Free kick for Brazil to be taken by Neymar. Results in first meaningful chance, David Luiz header with little conviction is picked up by Pletikosa.

Croatia starting to come into the game, Ivica Olic makes a break into Brazilian territory.

Dani Alves tried to get a cross in for Brazil but it was no trouble for Dejan Lovren.

3:57 p.m. ET: Brazil and Croatia have just belted out both of their national anthems. Serious pressure on Brazil here folks.

Just to remind everyone, the reason that Mario Mandzukic isn’t playing for Croatia is because he suspended. Read more about that here.

Leave it to our friends at Who Scored to tell us how both teams will line-up:

The Brazil team is:

No real surprises from Brazil, Neymar will likely be given a pretty free role.

The biggest takeaway from that is that Croatia’s Brazilian-born striker Eduarado doesn’t start. Pressure too much for him perhaps?

Nothing gets me more excited for the World Cup than World Cup commercials, check the best ones out here:

We should have team news to come soon. This afternoon’s game is going to be refereed by Yuichi Nishimura.

THe opening ceremony, which was its usual boring self, has ended, now we start the countdown to Brazil v Croatia.

Here’s that amazing moment again, no nothing to do with Pitbull:

If you blinked, you missed it but here's the moment in which a paralyzed person kicked a ball to launch the #WorldCup pic.twitter.com/5WU54Un6UH

J-Lo is treating the world to some wonderful lip-syncing.

The ESPN cameras seemed to have missed the amazing exoskeleton kick from the paraplegic kid.

The whole world is watching, waiting for the appearance of Jennifer Lopez and Pitbull.

The opening ceremony is off with a bang in Sao Paulo. 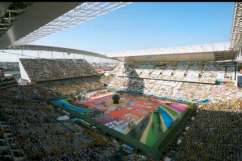 It’s almost here. The 2014 World Cup kicks off with a potentially classic encounter between the favorites and hosts, Brazil, and the underdogs, Croatia. The game kicks off at 4:00 p.m. Eastern Time. Stick with Heavy for all the best gifs, pics, video and Vines. 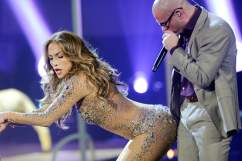