Colombia crushed JApan with a 4-1 victory to kick Japan out of Group C and the World Cup.

Japan had a chance against Greece to attain more points in Group C, but were unable to deliver despite having an extra man on the field for most of the game over Greece.

Colombia dominated the entire game not giving Japan even close to a chance, especially after the start of the second half.

Here is the recap:

Yasuyuki Konno Got a Yellow Card

Juan Cuadrado scored the first goal for Colombia on a penalty kick against Japan to put Colombia up 1-0.

Shinji Okazaki Followed Up With a Goal for Japan

Shinji Okazaki scored Japan’s first goal of the game against Colombia to tie it up 1-1.

Jackson Martinez Scored to Give Colombia the Lead

Jackson Martínez put Colombia back in the lead after netting a goal to make the score 2-1 over Japan.

Jackson Martinez Scores His Second Goal of the Game

Congrats to Jackson Martinez . Did not score since 2009. Criticized . Now 2 goals in 17 minutes for col

Rodriguez’s goal put Colombia up 4-1 to twist the dagger. 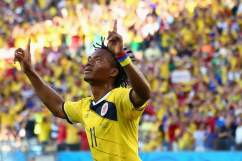