Const. David “Dave” Ross, a married father whose wife was expecting the couple’s second child, was one of the three Mounties killed Wednesday night in a rampage in Moncton, New Brunswick.

The Royal Canadian Mountain Police confirmed Ross’ identity at a news conference Friday morning, less than eight hours after Justin Bourque, the suspect in the rampage, surrendered to authorities following a 28-hour manhunt.

Here’s what you need to know about Ross:

1. He’s Married & His Wife is Pregnant With the Couple’s 2nd Child

Ross was the married father of an 18-month-old boy and his wife, Rachael, a nurse, is expecting the couple’s second child in September.

According to The Globe and Mail, Ross attended the Hillside Baptist Church in Moncton where he met his wife. The church is only about 2 km away from shooter Justin Bourque’s home.

Rachael’s sister-in-law, Raquel Vander Ploeg , raved about the couple’s wedding, which took place four years ago, to the National Post:

I don’t know, maybe I am biased. But Rachael was the most beautiful bride I have ever seen. You could just tell that she and Dave were so in love with each other. And now…

A churchgoer named Charles Doucet told The Globe and Mail Ross, “considered himself very lucky to have married such a great woman.”

According to the National Post, Rachael Ross knew her husband had been called into work when she got home Wednesday night and found that the garage door was left open and the grill was left on.

She found out her husband had been killed shortly thereafter, her sister-in-law told the Post.

Raquel Vander Ploeg said Rachael was “controlled, but not good” when she talked to Raquel from the hospital.

3. Ross Was Posted in New Brunswick for Seven Years

Ross worked as a K-9 handler stationed in New Brunswick for the last seven years. He was in Moncton for the last four or five, according to The Globe and Mail. He grew up in Victoriaville, Quebec, a city in central Quebec with a population of roughly 43,000.

4. Justin Bourque told a Former Co-Worker He Wanted to ‘Go Out With a Bang & Take People With Him’

Mike Campbell, who has known Bourque since he was 2 years old was Bourque’s best friend growing up, told Business Insider he recently had a bizarre exchange with Bourque, who had stopped by Campbell’s house to offer his condolences on the death of Campbell’s father.

And I said, ‘No, man really. You’re not going to come visit me? Come over any time, I’ll be here.’

And he was like, ‘That probably won’t be able to happen….’ I was kind of weirded out by it. A few weeks alter all this crazy nonsense happened…

Campbell told the site he had been close with Bourque when the two were younger, but the two stopped hanging out regularly because Bourque’s parents thought Campbell was too competitive at sports like street hockey.

Campbell said Bourque was brought up in a religious Christian household and homeschooled his entire life. He had recently quit his job at a trailer park and was working at a grocery store.

5. The Rampage Unfolded as Neighbors Looked on in Horror

Moncton residents looked on in horror as the rampage unfolded, and one family posted a graphic video on Facebook of the family witnessing one of the shootings while looking out their window. You can watch the video above.

The rampage brought to a halt a bustling city of about 70,000 that is typically one of the most vibrant in the region. Moncton, nicknamed the “Hub City” because of its central location in the Maritime Provinces, is the third biggest city in New Brunswick and the 79th biggest in Canada.

The city is about 300 miles northeast of the US border in Maine. 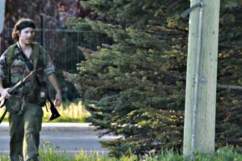 Loading more stories
wpDiscuz
0
0
Would love your thoughts, please comment.x
()
x
| Reply
Const. David Ross, a Quebec-born Mountie whose wife was expecting the couple's second child, was one of the victims of Justin Bourque's rampage in Moncton.