Cristiano Ronaldo is one of the most popular Portuguese soccer players in the world. He plays as a forward for Real Madrid in addition to captaining Portugal’s national team. He’s currently the highest paid “footballer” in the world as well as history. Celebrity Networth reports that Ronaldo is worth $250 million and each year he earns a base salary of about $40 million plus $30 million from endorsements. As for Ronaldo’s soccer accomplishments:

Read on for the facts on Ronaldo to learn more about his injuries, his love life, his son, and his business ventures.

Some fans were worried that Ronaldo might not be fit to compete in the World Cup as he was diagnosed with patellar tendonitis in his left knee last month in addition to a thigh injury. CBS Sports reports that:

Ronaldo had been battling leg injuries that had kept him out of practice in recent weeks, offering speculation that he might not be able to compete against Group G foes Germany, Ghana and the U.S.

Fortunately, Ronaldo is ready to go.

Saw some hops from @Cristiano today in Jersey! pic.twitter.com/NQC9zH4oLT

This isn’t the first time Ronaldo has battled health issues in order to play soccer. Celebrity Networth gives the details on the heart condition that almost kept Ronaldo from becoming the star he is today:

At the age of 15 he was diagnosed with a racing heart which almost forced him to stop playing soccer forever. After a successful surgery he was able to put his playing career back on track. 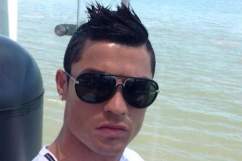 Model Irina Shayk and Cristiano Ronaldo have been dating for years. Their relationship has had its ups and downs, overcoming cheating scandals, and Ronaldo having a son by another woman. One of the women that Ronaldo was said to have had an affair with was Miss BumBum Andressa Urach. Fabwags.com previously wrote:

According to media Andressa Urach claimed she slept with Cristiano after they exchanged texts, followed by video chat via Skype, she said that she decided to give Cristiano a shot in bed because “He was obsessed with her butt”, but she didn’t regret as a matter of fact she loved it!.

Whatever the case, girlfriend Irina Shayk has stuck by Ronaldo’s side. Shayk is a Russian model most known for her years of work with Sports Illustrated Swimsuit. She actually met Ronaldo through a modeling campaign in 2010 for Armani Exchange.

3. Ronaldo Has Had a Rocky Life Despite His Professional Success

Before aiming his focus completely on soccer, Ronaldo had a rough time in school. Though Ronaldo was popular with the other kids, at age 14, he was expelled from school for throwing a chair at a teacher. Ronaldo claimed his teacher disrespected him. When this occurred, Ronaldo’s mother pushed him to solely focus on soccer.

When Ronaldo was 20 years old, he lost his father to an alcoholism-related liver condition, so Ronaldo says he does not drink alcohol. He actually won a lawsuit against media outlet Daily Mirror when they reported a story that he was heavily drinking in a nightclub.

After Ronaldo’s father passed away, he was arrested on suspicion of rape in London. Ronaldo was released on bail, denied the claims and the charges were dropped due to insufficient evidence.

4. The Background of Ronaldo’s Son Is a Mystery

The story behind Ronaldo’s son is very vague. No one has a straight story because Ronaldo has kept it very hush hush. The rumors are that Ronaldo paid off the mother of his child in order to get custody and that’s why her identity is unknown. Wikipedia writes:

5. He Stars in the Animated Nike Football: The Last Game

The Last Game is an animated story about the risks of football versus how to play it safe and Ronaldo is one of the main stars. According to YouTube: The scientist and the clones want to prove that riskless football is more effective. Ronaldo Fenomeno and the original players disagree, and they are willing to risk everything to prove the scientist wrong. There is only one way to know who is right: The Last Game.

Some of the other business ventures Ronaldo’s been a part of include his fashion boutique CR 7, which focuses on menswear and features Ronaldo as a model. The store features diamond studded clothing, leather, and even features some clothing for women as well.

Loading more stories
wpDiscuz
1
0
Would love your thoughts, please comment.x
()
x
| Reply
Cristiano Ronaldo is easily the most popular soccer player in the world right now. Read on for the facts on his hardships, his love life, his injuries and more.