One June 6 1944, three years after the U.S. officially declared its entrance into World War II, the Allied Forces stormed a beach in Normandy, France, in the largest amphibious military invasion in history. Led by General Dwight D. Eisenhower, the success of D–Day is generally considered the turning point in WWII. Once Allied forces had a stronghold in Western Europe, they could squeeze the Germans into defeat with the Soviet Union working from the East. Many historians believe that if the invasion of Normandy had failed, Hitler and the Axis Powers would have won the War.

Today, as we mark the 70th anniversary of D-Day, here’s what you should know about this pivotal moment in history.

1. General Eisenhower Knew There Was No Other Way

“This operation is not being planned with any alternatives,” Eisenhower said of Operation Overlord, the military code for what would become D–Day when the Allies began planning it in 1943. “This operation is planned as a victory, and that’s the way it’s going to be.” The night before the actual operation, however, Eisenhower penned a note that he kept in his uniform pocket in case of failure that read: “If any blame or fault attaches to the attempt it is mine alone.”

2. The First Soldiers to See Action Came by Air

On June 7, 1944, the US Ninth Airforce bombers debark their plane after successfully completing their D–Day mission (Getty)

Just after midnight, 20,000 American and British airborne troops parachuted onto Normandy’s beaches. Their mission was to distract German troops from a coordinated counter-attack on the Allied troops attacking by sea. It worked. When the Armada landed, German commanders had no inkling that an Allied attack was imminent.

These men were joined by 5,000 ships and 13,000 aircraft that landed along a 50-mile stretch of heavily fortified beach. No one knows exactly how many casualties the Allies sustained, but the U.S. Army estimates that more than 9,000 Allied troops were killed or wounded in the ordeal. The five beaches (code named Utah, Omaha, Sword, Gold and Juno) were heavily defended by German commander Ewrin Rommel, and the Germans fought long and hard, despite the Allies’ successful element of surprise.

Parisians celebrate the liberation of their city (Getty)

D–Day was the turning point in the War, but it would be nearly a full year before the war would come to a close. Regardless, people all over the Allied world took to the streets to celebrate the Allies’ managing to land in Normandy and penetrate “fortress Europe.” Anne Frank even wrote in her diary about D–Day: “… the best part of the invasion is that I have the feeling that friends are on the way. Those terrible Germans have oppressed and threatened us for so long that the thought of friends and salvation means everything to us!”

5. Every Five Years, World Leaders Gather at Normandy in Memorial

June 6, 2014, marks the 70th anniversary of D–Day, and President Barack Obama is among the dignitaries to visit the site. He and French President Francois Hollande will also tour a U.S. war cemetery in Colleville-sur-Mer, a site where more than 9,000 Americans are buried. This year could be one of the last years that veterans who were at the invasion will participate in memorial services, as many of them are well into their 80s and 90s. 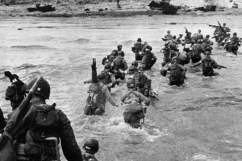 Read More
D-Day, History, World War II
wpDiscuz
0
0
Would love your thoughts, please comment.x
()
x
| Reply
What you need to know about D–Day, on this the 70th anniversary of the turning point in World War II.