Daley Blind, a midfielder for the Netherlands whose assist, featured in the video above, helped the Dutch crush defending World Cup Champions Spain in each team’s first match on June 13. For Blind, soccer runs in the family, and after being named Dutch Footballer of the Year for the 2013-2014 season, it’s clear he’s serious about bringing victory to the Dutch Oranje. Blind and the rest of the Dutch national team will play Argentina in the World Cup semi-finals July 9.

Here’s what you need to know about Blind:

This is Blind’s first world cup, but his impressive assist for the Netherlands in their victory over Spain is a testament to the 24-year-old’s talent. Blind told the NOS that his efforts in the match weren’t necessarily practiced, but instinct. He said:

I know that Van Persie goes there often. I looked up, I saw him leave, and without thinking too much, I made the pass. I enjoy that. That feels just as good as scoring the goal.

Soccer is clearly a family affair for the Blind’s, as Danny Blind, Daley Blind’s father, is the assistant coach of the Dutch national team. Danny Blind had an impressive career as a defender for the Netherlands. Danny Blind is the only Dutch soccer player to have won all international club competitions recognized by UEFA and FIFA. Danny Blind began coaching in 2005.

3. His Current Club is Ajax

Daley turned pro at 17 and signed with Ajax, after having come up through the club’s youth program. Danny Blind, Daley’s father, played for Ajax for 13 years. Daley Blind made an impressive debut for Ajax on December 7, 2008, when he forced a counterkick which allowed teammate Jan Vertonghen to kick a game-winning goal. He’s also helped Ajax win two Eredivise championships, one for the 2010-2011 season and the other for the 2011-2012 season. His contract with Ajax runs through the summer of 2016.

4. There’s Talk of Him Being a Good Fit for Manchester United

According to Bleacher Report, Blind’s versatility could be a great catch for Manchester United for the summer, as opposed to British player Luke Shaw, who had agreed to join the team for a hefty price.

Blind is dating model and dancer, Candy-Rae Fleur, whose resume includes dancing with Robin Thicke at the MTV EMA’s. She’s from Amsterdam and graduated from Hermann Wesselink College in 2007. She also works as a broadcast media professional, according to her LinkedIn page. 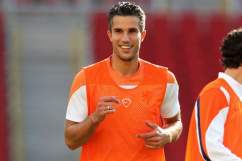 Australia vs. Holland Odds: 5 Fast Facts You Need to Know