Daniel St. Hubert, the suspect in the murder of 6-year-old Prince Joshua Avitto and the stabbing of 7-year-old playmate Mikayla Capers on Sunday, June 1, has been arrested by the NYPD, reports The New York Post. St. Hubert was taken into custody at 133rd Avenue and 145th Street in the Queens neighborhood of South Ozone Park close to JFK airport.

The 27-year-old St. Hubert may also be implicated in the murder of “beloved” Brookyln teenager Tanaya Grant-Copeland on May 30. All of the attacks occurred in the East New York neighborhood of Brooklyn. Avitto and Capers were stabbed in an elevator at Boulevard Houses around Schenck and Stanley avenues.

1. St. Hubert Just Got Out of Prison

St. Hubert was identified by the NYPD through DNA taken from the 8-inch knife used in the attack on Avitto and Capers, reports NBC New York.

The DNA was in the NYPD’s criminal database because St. Hubert has nine prior arrests.

He was last paroled on May 23 on assault charges after serving seven years in prison, according to the New York Post.

NBC New York reports that among his other arrests, he has convictions for assaulting a cop and a corrections officer. Cops were able to get a location on St. Hubert by tracing a cellphone he was using at the time.

2. The Attacks Were Described as Random

The attacks have been described as a “random” by investigating officers. St. Hubert has been described as being 27 years old. He stands at 5’9″ and weighs 210 pounds. The suspect used a steak knife in the attack.

The two victims on June 1 were playing in front of their building when they went back inside to get ice-cream. It’s then that they met their attacker in the elevator at around 5:50 p.m. CBS New York reports that Mikayla remains in critical condition in hospital with a breathing tube. Her family have told the media that she is in-and-out of consciousness.

Mikayla Capers (above) remains in hospital after the attack on June 1. (Screengrab via NBC New York)

The Western Beef grocery chain had donated $50,000 to the reward fee leading to an arrest of the suspect. The total stands at $62,000, reports New York 1. When asked about the reward, Benjamin Petrofsky, of Western Beef, told CBS New York:

It was a sense of outrage and intense sorrow at what happened and with those conflicting emotions, it kind of compels you. You’ve got to do something.

Reports suggest that St. Hubert was arrested by NYPD officers without the aid of a tip.

Prince Joshua Avitto’s father, Nicholas, had identified St. Hubert as a homeless man who hung around the neighborhood in East New York where the attacks happened, reports The New York Post. Speaking to the Daily News, Nicholas Avitto said that the artists rendering “resembles a guy I used to give a dollar to, a cigarette, a quarter, people fed him.”

Nicholas Avitto also speculated that his son probably tried to save his friend, Mikayla, from an attack, “He was probably acting like Batman at the end, with that guy trying to stab him.”

5. St. Hubert May Have Changed His Appearance in the Last Few Days

Daniel St. Hubert was first named by New York Mayor Bill De Blasio at a press conference. He was considered armed and dangerous, and cops thought he may be trying to leave the city. The mayor told the media:

The human dynamic here is so deeply moving, so disturbing – two young children on a summer evening on the way to get ice cream. I spoke to the father of P.J. Avitto yesterday. I spoke to his mother today. These parents are in such pain now. As a parent myself, my heart goes out to them, and all of the family members.

CBS New York reports that $500,000 had been earmarked to restore the surveillance cameras in Boulevard Houses and other housing authority buildings. The repairs were due to begin on June 2, the day after PJ Avitto was murdered. De Blasio called this “unacceptable bureaucracy.” 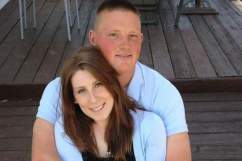 Loading more stories
wpDiscuz
0
0
Would love your thoughts, please comment.x
()
x
| Reply
Daniel St. Hubert was identified as the suspect in the murders of Prince Joshua Avitto and Tanaya Grant Copeland in Brooklyn, New York. Just minutes after his identity was made public, St. Hubert was arrested in Queens.