Brat’s surprise victory came days after Cantor’s campaign released an internal poll showing the congressman up by a whopping 34 points. NPR notes that no sitting House majority leader has been rejected by his own party’s voters since 1899, which makes Brat’s victory even more shocking to the pundits. The Wall Street Journal adds, “Mr. Brat was so unknown that his Wikipedia entry was only two sentences before Tuesday night.”

Cantor’s defeat will have wide-ranging political consequences and likely derails any hopes that Congress will take up an immigration reform bill in the near future.

Here’s what you need to know about Brat…

This is the tea party college professor who just kicked Eric Cantor out of Congress: http://t.co/2ExhWO82IK pic.twitter.com/apFYL3SETY

Brat repeatedly accused Cantor as favoring “amnesty” and campaigned on his opposition to immigration reform. He also campaigned on being a fiscal conservative committed to low taxes and low spending.

On his campaign website, Brat’s stance on immigration is stated quite clearly:

When addressing the issue of immigration, we must start by securing our border. An open border is both a national security threat and an economic threat that our country cannot ignore. I reject any proposal that grants amnesty and undermines the fundamental rule of law. Adding millions of workers to the labor market will force wages to fall and jobs to be lost. I support proposals that will secure our border, enforce our current laws, and restore an orderly and fair process to allow law abiding individuals to work towards becoming citizens of this great nation.””

Virginia’s 7th Congressional District is heavily Republican, and Brat is a virtual lock to cruise to victory in November, making him the district’s de facto Congressman-elect.

Some voters felt Cantor was simply on the wrong side of the hot-button issue of immigration. The Washington Post notes:

“A seemingly critical issue for Cantor was immigration. The majority leader had championed a Republican version of the Dream Act, which would enable some undocumented immigrants who entered the country as children to qualify for in-state college tuition rates. Although Cantor never brought the legislation to the House floor, his support for the idea irritated staunch opponents of immigration reform.”

2. Laura Ingraham Campaigned for Him & Said the U.S. Should Have Sent Cantor to the Taliban

The array of prominent conservatives who campaigned for Brat included talk radio host Laura Ingraham, who appeared at a Brat fundraiser earlier this month and made headlines when she said that instead of sending five Guantanamo detainees to the Taliban in the Bowe Bergdahl swap, President Obama should have sent Cantor instead.

“I was thinking about this prisoner swap. I kind of wish that President Obama would have thought this through a little bit more. Instead of sending five Taliban MVPs over there, he could have just traded one Eric Cantor…If you actually want to help America, sending Taliban back to the battlefield, that’s not going to actually help us. The Taliban could actually kill some of our people.”

3. David Brat Is an Economics & Business Professor at Randolph-Macon College

In the video above, Dr. David Brat announces his intentions to face off against Eric Cantor in Virginia’s 7th Congressional District. Dr. Brat discusses his reasons for running on a live TV broadcast.

Brat is the chair of the economics and business at Randolph-Macon College, a private school in Ashland, Virginia, where he joined the faculty in 1996.

According to the Washington Post, one of the reasons Brat’s campaign was considered such a longshot is that he repeatedly declined to show up for campaign-related meetings in Washington because of finals:

Brat, an economics professor, was not considered a major threat until Tuesday night, simply failing to show up to D.C. meetings with powerful conservative agitators last month, citing upcoming finals. He only had $40,000 in the bank at the end of March, according to first quarter filings. Cantor had $2 million.

4. David Brat Has a Ph.D. in Economics & a Master’s in Theology

Brat’s financial acumen may have helped him make the most of his money. As you can see in the campaign finance breakdown above, Brat spent a fraction of what his opponent did, and still managed to win.

According to Brat’s faculty bio, he has a Ph.D. in economics from American University in Washington D.C., a Master’s from the Princeton Theological Ceremony, in addition to a bachelor’s in business administration from Hope College in Holland, Michigan.

5. David Brat Has Some Interesting Comments on RateMyProfessors.com

Brat’s profile on RateMyProfessors.com is filled with a number of comments from former students. One of the most amusing reads:

“He’s so charming and really knows how to incorporate real world examples to keep the class exciting and relatable…Plus he’s total eye candy!!”

Not all ratings seem to be legit. One rating reads, “Great professor. He banged me hard in the classroom to pass the class. 5/10, would bang again.” Given the date of this posting was June 10, the same day Brat won the election, it seems likely this comment is fake. The comment, whether real or fake, is likely to raise some eyebrows.

Want to get a better sense of what this fresh political figure is really like? Check out the video above, taken during a February 2014 fundraiser. 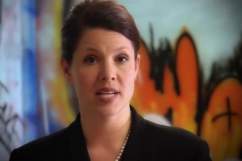