Djamel Haimoudi, 43, is an internationally renowned referee currently presiding over matches at the 2014 World Cup in Brazil. Haimoudi, a native Algerian, is well regarded and has been able to avoid any significantly controversial calls. Above you can see FIFA’s official profile video on Haimoudi, as well as his odd emotionless straight-faced style of speaking.

Here is the background you need to know on Djamel Haimoudi:

1. US Coach Jurgen Klinsmann Is Unhappy Haimoudi Will Referee USA vs Belgium

Jurgen Klinsmann unhappy with choice of Algerian refereeKlinsmann unhappy with Fifa's decision to elect an Algerian official to referee USA's match against Belgium. Get the latest headlines http://www.telegraph.co.uk/ Subscribe to The Telegraph http://www.youtube.com/subscription_center?add_user=telegraphtv Like us on Facebook http://www.facebook.com/telegraph.co.uk Follow us on Twitter https://twitter.com/telegraph Follow us on Google+ https://plus.google.com/102891355072777008500/ Telegraph.co.uk and YouTube.com/TelegraphTV are websites of The Daily Telegraph, the UK's best-selling quality daily newspaper providing news and analysis on UK and world events, business, sport, lifestyle and culture.2014-07-01T10:49:51.000Z

Above you can hear why the USA’s Jurgen Klinsmann isn’t happy with FIFA’s choice to put Haimoudi in as referee in the July 1 match against Belgium.

In 2012, the Confederation of African Football bestowed the award of Africa’s Best Referee on Haimoudi at a ceremony in Accra, Ghana.

Haimoudi became an Algerian league referee in 2001, followed by his swift appointment as a FIFA judge in 2004. Since that time he’s refereed 65 international matches.

4. He Gives Around 3 Yellow Cards Per Match

According to their World Cup referee profiles, UK’s Mirror has found that unlike other refs in the tournament, Haimoudi has a relatively low frequency of giving cards. He averages 3.35 yellow cars and .15 red cards per game.

5. He Referees the July 1 Game Belgium vs USA

Haimoudi will take control of the anticipated USA vs Belgium World Cup match on July 1. This will be both teams’ first game in the knockout round and will determine who will play either Argentina or Switzerland in the Quarterfinals. 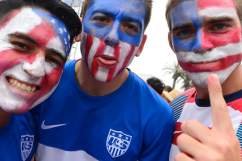