Eitan Green is one six people presumed dead after a climbing accident that took place over the weekend on Mount Rainer in Washington state. Green, 28, and Matthew Hegeman were both experienced mountain guides helping four climbers up the 14,410 foot mountain.

Here’s what you should know about Green, his life, and his untimely demise.

1. He Grew Up in New England

According to Green’s website, he grew up in the Boston area and went on to get a bachelor’s degree in anthropology at Colby College in Maine. While in college, Green indulged his love of mountains by going abroad to the Indian Himalayas, where he “became fluent in Nepali.”

During college, he began guiding on the cliffs of New Hampshire and Maine, before picking up and moving to Washington.

2. He Said ‘I Live, Work and Play in the Mountains’

Acquaintances remembering Green, as well as his own writing, show a deep love for mountains, adventure and the outdoors. On his website he wrote, “I am currently working towards becoming a certified guide through the American Mountain Guides Association. I live, work, and play in the mountains.”

He was dedicated to giving people the highest quality experiences in the outdoors.

3. A Memorial Service Will Be Held in Massachusetts on Thursday

An obituary released for Green identifies him as the “adored son of Jeffrey and Beth Green,” the “cherished brother of Elana Silver and brother-in-law of Jason Silver,” and the “loving grandson of the late Florence and Israel Zevin and the late Adele and Herbert Green.”

A memorial will be held for Green on Thursday May 5, in Brookline, Massachusetts.

On its website, the company that ran the guided trips, Alpine Ascents International, released a the following heartfelt statement regarding the loss of their two guides:

Matt and Eitan are near and dear to all of us at Alpine Ascents. While often guiding on Rainier and in the Cascades, their skill level and passion for the mountains were always at the forefront of their time in the field. Matt, intense, philosophical and driven by the right way to do things, left an indelible mark on all around him. His pursuit for excellence was matched by his sense of camaraderie and humor. Eitan, quick with a smile and exuberant, had that infectious nature of guides who love their work and time in the mountains. His talent as a strong leader and critical thinker in the wilderness was unsurpassed.

Two guides, Green and Matthew Hegeman, and four climbers, including Mark Mahaney, 26, are believed to be dead near Liberty Ridge, a particularly dangerous spot on Mt. Rainier that is known to be vulnerable to avalanches. The other three victims’ names have not been released by Alpine Ascents or the authorities out of respect for the families, but Intel has confirmed that one of its vice presidents, Uday Marty, was among the victims. 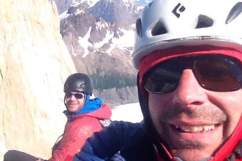 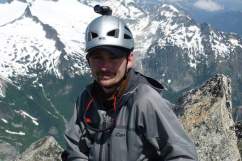 Loading more stories
wpDiscuz
0
0
Would love your thoughts, please comment.x
()
x
| Reply
Eitan Green, 28, is a guide and one of the six people presumed dead after a hike to Liberty Ridge on Mt. Rainer in Washington.