Geoff Cameron's Story – "One Nation. One Team. 23 Stories."U.S. Men's National Team defender Geoff Cameron discusses cooking, his long-time pregame ritual and his obsession with keeping things neat and organized. The Stoke City defender also talks about his pride for Boston sports and his hometown of Attleboro, Mass. "One Nation. One Team. 23 Stories." is a ussoccer.com video series with the members of…2014-06-08T19:09:23.000Z

Stoke City’s Geoff Cameron is a thoroughbred American that doesn’t believe in the idea of giving up. The Boston native is predicted to be top three for most minutes played in the World Cup for the U.S. national team.

1. He Has Played the Second Most World Cup Qualifiers on the USMNT

In January 2009, Cameron was chosen to come play for the U.S. national team to play center back for the team and will do so in the World Cup, despite his ability to play a diverse range of positions. Shortly after he got the call he was injured and forced to wait untill the next season.

He stuck it out unti 2010 when he received the call from the newly appointed U.S. national team coach, Jurgen Klinsmann, who took over after the 2010 World Cup. Immediately after Klinsmann became coach eh recruited Cameron to try out for the 2014 World Cup where he proved himself, claiming a permanent spot on defense while logging the third most minutes in the 2012 season. Captain of the USMNT, Clint Dempsey is the only player on the team currently to have played more than Cameron’s 13 World Cup qualifying matches.

2. He Used to Be the Smallest Kid On the Team

Now standiung at 6 feet 3 inches, it is hard to believe that Cameron was one of the smallest kids on the field when he started playing the game, however this did not hinder him but inspired him to try ten times as hard as the other players out there. His coach would always mess with him, telling him to eat certain ridiculous things such as Portugese bread in order to grow.

In two years, Cameron grew 6 inches, turning into one of the tallest on the team.

His father told the Boston Globe:

“He was like a giraffe who was just born, trying to use his legs.”

Cameron is now a starting player on Stoke City FC in the English Premier League since 2012 when he signed a contract with them with a salary of $255,000 a year. His contract runs through the 2014 season.

Now that Cameron has come such a long way to play in the EPL at the highest level, he told Bleacher Report of other challenges come to play at such a high level:

“They call me the Yank, it’s okay, it doesn’t bother me. I’m happy because it challenges me every single day cause I’m proving to myself and everybody else that I belong in this league.”

3. He Transferred From West Virginia to Rhode Island

All Cameron did was practice and train in order to pursue soccer a career path. He wanted to start with playing at the collegiate level for a Division I team. He was thrilled when West Virginia University scouted him as a camp in Pennsylvania.

Cameron became a WVU Mountaineer for his Freshman and Sophomore year before transferring back to the Northeast to play for URI, a more comfortable fit for the Bostonian. At URI he excelled and became a standout on the team at a consistent starter.

Cameron became one of 54 Division I seniors chosen for the 2008 adidas MLS Player Combine, while also receiving NSCAA All-Mid Atlantic Region First Team Honors. After his senior year, he had been awarded the Atlantic 10 Conference’s inaugural Midfielder of the Year Award and selected for the All-Conference First Team too.

4. Desire, Dedication and Discipline Are Tattooed On His Arm

Geoff Cameron started from the bottom and practiced his way all the way to the top. Cameron realized his exactly why he was put on this earth and that he had to do everything he could to get to that point when he watched a soccer game at Foxborough at the age of eight (twenty years ago). His father had brought him to World Cup match and open practice where he was able to interact with the professional players. His dream was inspired when he hung out with Bolivian player Marco “El Diablo” Etcheverry.

Cameron’s tattoos say a lot about himself. The mantra is there as a reminder to him about the game and what you need to always keep in mind in order to succeed in a sport where there are so many talented players. He believes these three words are what separates the best from the best.

He told the Boston Globe in an interview:

“You’ve got a guy to the left of you and a guy to the right of you that wants your position, that wants your minutes. You have guys challenging you every day in practice and you can’t take a day off. Even when you’re struggling with injuries and knocks here and there and dead legs, you’ve got to push through it because there’s a guy fresh and if you’re not training for two or three days you’re not playing on the weekend.”

Out of the many handsome players on the U.S. national team, Geoff Cameron is considered one of the best looking on the team and is known for his up-keeping habits on both Stoke City and the USMNT.

“Geoff Cameron. 100 percent. He looks after himself very, very well. He shaves his legs and makes sure his eyebrows and hair are done to the max.”

Maybe this is how he landed his longtime girlfriend, Lindsay Hagopian whom he plans on marrying sometime in the near future.

Cameron and Hagopian are both originally from Attleboro, Massachusetts and dated through college college while attending URI. Hagopian now lives with him in Manchester UK where he is following his dream.

The couple’s playful relationship can be seen on each of their instagram accounts as shown below with Hagopian’s TBT of Cameron. 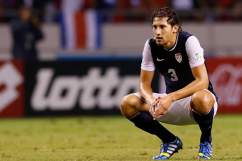 Read More
Soccer, Sports, USMNT, World Cup
Boston bred Geoff Cameron is predicted to be a starting defender for the USMNT. Here's what you need to know about him.