George Jung, aka “Boston George,” has been released from prison after serving almost two decades behind bars. Jung, 71, was one of the biggest drug smugglers and traffickers in American history, transporting a majority of America’s cocaine into the country from Colombia for the better part of a decade.

Above you can hear him talking about Blow, the 2001 biopic based on his life, starring Johnny Depp.

Here is what you need to know about Jung, his recent release, and his place in drug-dealing history.

1. He Served Almost 20 Years in Prison

According to interviews, Jung began selling marijuana during the late 1960s, smuggling it on domestic flights from California to Massachusetts and making a healthy profit. Around that time, Jung was arrested for the first time in Chicago with a “trunk full of pot” and sent to federal prison in Danbury, Connecticut. It was there that he made the connections to get into cocaine trafficking.

After more than a decade of cocaine trafficking he was arrested in 1994 and spent almost 20 years in federal prisons in New York, Texas, and New Jersey.

TMZ reports that Jung is being released to a halfway house on the West Coast. You can head over there to see a photo of Jung after his release this morning. 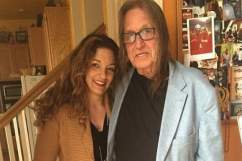 2. He & Johnny Depp Became Friends While Depp Made ‘Blow’

Although critical reception was mixed for the 2001 biopic, Blow became a cult classic. Johnny Depp stars as George Jung in the Hollywood-ized version of how the small-town kid from Massachusetts came to sit at the top of a drug empire. You can watch the trailer for the movie above.

Johnny Depp with George Jung at Fort Dix Federal Prison in 2002. He will be released in November of this year. pic.twitter.com/HV6U1Rgrax

While preparing for the role, Depp met with Jung, and for “several hours … talked intensely,” Depp wrote in a letter that would become the introduction to a later printing of the book about Jung called Blow by Blow.

It’s very rare in life that any person opens up their heart and soul to you with unlimited access to their most profound thoughts, dreams, fears, regrets, intimacies… even more rare when you’ve just met that person and, because of the obvious predicament, it’s highly unlikely that you will be spending too much time with them in the near future. So for this and more, I owe a great debt of gratitude to George.

Below you can watch George Jung speak more about the film:

After meeting Colombian drug dealer Carlos Lehder in prison in Connecticut, Jung went into the cocaine business with his former bunkmate, taking trips to Colombia and convincing people to carry cocaine-filled suitcases from certain areas of the Caribbean. Capitalizing on America’s surging appetite for cocaine, Jung’s business exploded.

According to a PBS interview, Jung worked with Lehder and Pablo Escobar‘s Medellin Cartel and started making millions of dollars after purchasing his own plane to ship massive quantities of cocaine.

Between the late 1970s and early ’80s, Jung claimed he was suppling 85 percent of the cocaine in America.

According to Celebrity Net Worth, at his peak Jung was pulling in $15 million per drug run.

You can watch a documentary about his life above.

4. He Ratted Out His Friend to Cut His Sentence by Almost 40 Years

Jung was arrested in 1994 with 1,754 pounds of cocaine in Topeka, Kansas. After pleading guilty to conspiracy, he was sentenced to 60 years in prison. He served time in New York state and Texas before being transferred to the Federal Correctional Institution in Fort Dix, New Jersey, and is now being released after just 20 years for cooperating.

While in prison, Jung decided to help the authorities in the trial of his long-term business partner Carlos Lehder in exchange for less time. He told PBS:

Well, the reason I made that decision is that Carlos Lehder had come to the end of his rope too and he was captured in Colombia by the DEA, brought to the United States, and I was approached to testify against him and I told them no, I had no inclination to do that. And then several weeks later it came out in the “Miami Herald” that he had written a letter to the Vice President of the United States, George Bush, offering to cooperate fully for total immunity. I just felt that that was the final slap in the face and I picked up the phone and I agreed to go to Jacksonville, Florida. I made a phone call and I was taken up to Jacksonville and interviewed. My story was checked out and I simply became a witness.

5. He Briefly Left Prison in 2012 for a Medical Procedure

In 2012, while still serving time in a federal prison in Texas, Jung was briefly released so that doctors could remove a cancerous mole on his nose. At the time, it was believed the time he spent in the Caribbean and South American sun was to blame for the dangerous growth.