A sunbather in Heligoland, an island in northern Germany, is counting his lucky stars after nearly getting hit by a plane.

‘In my defence I can say that I didn’t see him because he was lying down and I’m just very grateful it worked out well and I didn’t land on him. I don’t want to say any more than that. I fear I will be in for a fine from the Federal Aviation Office but I hope I will be able to keep my licence.’

Luckily no one was hurt. 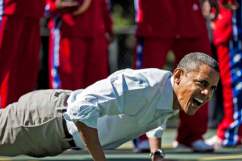 Loading more stories
wpDiscuz
0
0
Would love your thoughts, please comment.x
()
x
| Reply
Pilot Juergen Drucker was landed his plane on a beach in Heligoland, an island in northern Germany, when he nearly killed a beachgoer.