It wasn’t a classic but it was seriously interesting. Germany will now face France on July 4 in the World Cup Quarterfinals after the brave Algerian defenses were finally breached in extra time. The team from Africa took Germany all the way, throughout the 90 minutes both sides traded shots, as it was the goalkeepers who were the stars of the show. Manuel Neuer bolted from his goal at every opportunity to clear his lines, whereas Adi Mbolhi played more conservative, but was equally solid. Eventually, Germany scored in extra time and Algeria struggled to get back into it.

Here’s how it went down in the Estadio Beira-Rio:

Algeria Got a Lifeline in Injury Time

Islam Slimani stole into the back post after the clock ticked passed 120 minutes and he scored a lovely strike. The players were eager to get the ball back to the halfway line. After the play restarted, a long ball got to Slimani in the box but his tame header went straight at Neuer.

Germany Made Certain After 119 Minutes

Mesut Ozil made it 2-0 in the 119 minute with the Algerian team looking worn out. The African team’s defense couldn’t clear their lines and Schurrle and Ozil played passes in the box before the ball came back to the Arsenal player who smashed it home.

Andre Schurrle’s header made it 1-0 as he placed home a cross from the left. Thomas Muller (who hasn’t been good) drove into the box and slid the ball across the box to score.

There were extreme celebrations from the German players, and maybe a hint of relief too.

The Game Went to Extra Time

Despite late and sustained German pressure, this was a battle between the sweeper/keeper Manuel Neuer and Algeria’s more standard, but equally impressive, Adi Mbolhi. Both goalies were called upon more than they should have been, the defenses have been poor meaning the two keepers have needed to be at their best.

Many Germany fans will be hoping that Jogi Low will call on Miroslav Klose to come in and try to win this. The obvious change would be Klose for Muller, who has been poor.

Late in the game, with Germany putting serious pressure on Algeria late in the game, the Germans got a free kick just outside the box. An elaborate routine occurred involving Kroos, Ozil and Muller.

Kroos was meant to hit the ball with Muller and Ozil acting as decoys. It probably looked good in training but unfortunately Muller fell over, giving the Algerian defense more time to react, eventually when Kroos was able to play the ball, the Algerian defenders were able to push forward and play offside.

Algeria’s Mbolhi Made One of the Saves of the Tournament

In stopping a Philip Lahm drive shot from 25 yards, Algeria goalie, Adi Mbolhi, made an amazing save high to the his right. The Bayern Munich defender/midfielder whacked the ball with his right foot, cutting in from the left. The style of the shot sent the ball back across Mbolhi’s goal, forcing him into a dramatic save. Then late in the game, with just 11 minutes left, Thomas Muller headed a Sami Khedira right wing cross from point blank range but Mbolhi made a remarkable save. Andre Schurrle got to the rebound but it was cleared off the line. This was a battle between two great goalkeepers.

Algeria Has Been Matching Germany Across the Field

Any thoughts that this would be an easy ride for Germany are being erased. The underdogs from Africa have been all over the slow German defense for much of the first half. Per Mertesacker is looking slow and uninterested. On more than one occasion Neuer has had to run from the German goal to sort out the mess caused by his defenders, the German goalie has been immense. Slimani had a goal ruled out for offside midway through the half. 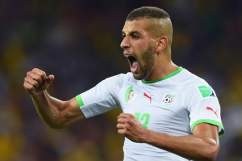 Here is how the team’s lined up from the start: 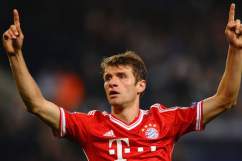