Monday night’s episode of Hit the Floor sent fans into shock. More was revealed about Chase’s involvement in Olivia’s death, and our favorite romances were tested. Read on to find out what you missed.

“I didn’t kill her. But I did move her body.” After Sloane asks why Chase had his fingerprints all over the shovel that killed Olivia, he admits that he didn’t kill her, but was involved in moving her body. Chase says Oscar is behind it all. He said Olivia fell from upstairs, and said he knew Oscar did it since he “gets away with everything. Her body was the only weapon I had to make him pay. So I used it.” He may have used her body to fight Oscar, but it still seems a little wrong to use your dead wife’s body as collateral.

As for the shovel, Chase says Oscar had him tailed and had someone put the shovel in the back of his car to frame him. So, what is it that Olivia knew that threatened Oscar in the first place?

Oscar calls Chase in prison one night to essentially threaten him. He says that that if Chase signs the plea, he’ll get out of jail in 20-30 years, and if he doesn’t, then he’ll be hunted down either way.

In the end, Chase signs the plea deal. In the closing scenes of the episode, he goes ballistic on Oscar. “You killed my wife!” but Oscar denies it. So, who actually killed Olivia is still a mystery.

Jelena attempts to to expose Ahsha and Derek on the Kiss Cam. But her plan fails miserably, and Ahsha ends up kissing German in front of the entire stadium, as Jelena and Derek watch. Derek storms off after seeing the two lock lips.

When Ahsha tries to have a chat with Derek, he blows her off.

A few scenes later, though, Derek tells Ahsha that seeing her kiss someone else made him realize he loves her! And she says the same back. We may all have seen this coming, but that didn’t make it any less cute.

Unfortunately, though, the media caught them. The reporter Jelena hired to expose the couple sent the pictures of them kissing to TMZ. That evening while Ahsha and Derek are canoodling, a reporter from TMZ calls Derek asking him to comment on his “lady friend.”

“One of my oldest friends is in the ground. The other is behind bars. The one thing they have in common is Devil’s Arena.” Sloane is convinced Ahsha will be destroyed by the Devil Girls.

Not surprisingly, though, Ahsha doesn’t budge. She’s too dedicated to the team, and it means too much to her to leave now.

4. The Love Triangle Gets More Complicated

The love triangle between Terrence, Jelena, and Zero takes a turn for the worse… or, at least, it becomes far more confusing. When Zero asks Terrence if he’s okay with him seeing Jelena, Terrence says it’s fine. Zero is skeptical, but Terrence admits he sold the restaurant he named after Jelena.

When the “happy couple” (hah) are asked to pose for a magazine, Terrence storms off. He can’t even handle being around Jelena.

Zero later tries to win Jelena over by telling her that he made an offer on the restaurant, but this pisses Jelena off. In the end, however, he cuts Jelena off and admits that Terrence took the restaurant off the market. Maybe he’s not as over Jelena as he pretends to be.

5. Lionel Tells Pete She’s Not Over Him

“You. I want you. It’s why I’m here. It’s why I’m dragging out the divorce.” Well, now Pete understands why Lionel has been acting so crazy.

Pete turns her down, though, and says everything between them is just history. Nothing more. He then seeks out Raquel to tell her how he desperately he wants their relationship to work. Raquel introduces her son to Pete, which she’s apparently never done with any other guy. Its pretty dark cute. 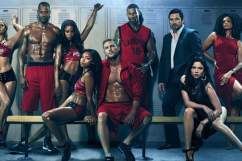 Loading more stories
wpDiscuz
0
0
Would love your thoughts, please comment.x
()
x
| Reply
The mystery behind Olivia's death is still unraveling. Find out what happened on the third episode of VH1's 'Hit the Floor.'