Despite reports of damage, there are no reports yet of injuries.

1. The Tornado Touched Down Near the Indianapolis Motor Speedway

Homes in the town of Speedway, home to the Indianapolis Motor Speedway, and the neighboring town of Plainfield, sustained damage. Both towns are just outside of Indianapolis.

The reason a wall cloud has a rain free base is because the air is actually moving upward into the wall cloud. Because of this upward motion, rain cannot fall down through the wall cloud. This is a great benefit to storm chasers because it makes this wall cloud, and the possible tornado, rain free and thus visible.

2. The Storm Was Spinning Like a Top Toward Indianapolis but Didn’t Touch Down in the City

The Weather Channel reports on Twitter that the storm touched down near Speedway at 1:48 p.m. Central time and was moving east toward Indianapolis at 25 miles per hour. ABC 6 reported that the storm was “spinning like a top” through the area as it moved into northern Marion County and southern Hamilton County.

There are reports of heavy rain and wind throughout the area, but no reports of a tornado touching down in downtown Indianapolis.

3. Crews Are Going Door to Door in Plainfield

#WTHR some pictures from the Tornado that tore through Plainfield and Indianapolis @WTHR @ChuckWTHR pic.twitter.com/YCux6oN70D

The Evansville Courier & Press reports that crews are going door to door in Plainfield checking on residents after several houses were damaged.

As of 2 p.m., rotation was seen on radar in southern Hendricks County. A few minutes later, the radar indicated the storm was weakening, but it strengthened again just west of Indianapolis about 2:30 p.m.

4. Meetings Are Going on at NCAA Headquarters in Indianapolis

Got into Indy for meetings at the NCAA offices and as I walk in I hear tornado warning sirens. Gump's in the house! pic.twitter.com/XPZajMPvNm

Jerry Bovee, the athletic director at Weber State University, tweeted that he had just arrived for meetings at the NCAA’s headquarters in Indianapolis when tornado warning sirens stated going off.

5. Funnel Clouds Were Spotted in Indiana on Sunday

People in Greater Indianapolis have been on the lookout for severe weather for several days. WISH Tv reports that funnel clouds were spotted in the area on Sunday night, although no tornado warnings were issued at that time. 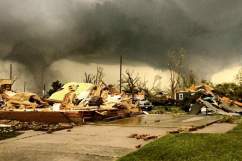