The group, known for brutal tactics in the war in Syria, has become a destabilizing force in the region as territory falls under its military control and its fighters inch toward Baghdad, the capital of Iraq. President Obama said he was considering “all options” in how to deal with the renewed and expanding radical occupation of Iraq. Iran has also taking an interest in the conflict, with Iraqi officials confirming to CNN that 500 Iranian troops have entered Iraq to assist in the fight against ISIL.

A picture taken with a mobile phone in Mosul shows uniforms reportedly belonging to Iraqi security forces abandoned on the road as forces fled on June 10, 2014. (Getty)

On Wednesday, June 10, ISIL solidified its hold on Mosul, the largest city in Northern Iraq, a city with a population of around 600,000 people. ISIL’s attack on Mosul, which Al Jazeera reports occurred with around 800 Sunni fighters, defeated over 30,000 Iraqi soldiers, many of whom abandoned their uniforms and fled.

While the taking of the city, ISIL recovered “massive cache” of weapons, vehicles and equipment, given to Iraqi security forces by the United States. Reports claim that many pieces of American equipment captured in Mosul have already been seen on the Syrian battlefield.

The United Nations Mission in Iraq, UNAMI, believes that the militant attack on Northern Iraq has forced some 500,000 people to flee from that region, with 40,000 more joining the refugees as ISIL continues to spread its offensive.

As an al-Qaeda linked group, ISIS began as just the Islamic State of Iraq when they fought against American and coalition forces in the early 2000s. In April 2013, ISIS and al-Qaeda announced the creation of the Al-Nusra Front, a jihadist group that has been on the front lines of battling the troops of contested Syrian president Bashar al-Assad. There, ISIS’ name has become synonymous with brutal tactics and infighting amongst anti-Assad rebel groups.

In February 2014, ISIL reportedly broke ties with al-Qaeda after the militant group renewed an offensive against fellow Islamist rebel groups. Fellow rebel groups, as well as those loyal to Assad, have accused ISIS of being responsible for countless beheadings and crucifixions, many of which have been captured on camera or video.

Now in Iraq, the brutal tactics have reportedly continued. Reuters reports that in Mosul, ISIL summarily executed hundreds of people. The video above claims to show ISIL fighters shooting randomly into cars on a highway.

A map of Syria and Iraq with the territories currently under control of ISIL highlighted in red. (WikiMedia)

As sectarian violence continues between the Shiite controlled nations such as Syrian and Iran, ISIL and Sunni rebels have claimed that they are trying to remake an ancient Islamic caliphate that stretched across the contemporary countries of the Syria and Iraq. Reuters reports that ISIL gave captured Iraqi soldiers a chance to “repent … for those asking who we are, we are the soldiers of Islam and have shouldered the responsibility to restore the glory of the Islamic Caliphate.”

One thing standing in ISIL’s way are the Kurdish people in northern Iraq, who are defending Kurdistan, an ethnic region on the border of Iraq, Syria and Turkey. On Wednesday, the Iraqi government announced that it would be aided in its battles against the spread of ISIL by the Kurds to the north. Al Jazeera reports that the ISIL offensive is now only around 60 miles away from Erbil, the capital of the Kurdish region, often referred to as the “Kurdish Jerusalem.”

4. ISIL Is Heading Toward Baghdad for a ‘Decisive Battle’

Iraqi civilians line up as they volunteer to join the fight against a major offensive by jihadists in northern Iraq on June 12, 2014. (Getty)

Reuters quotes an ISIL regional tribal figure as saying, “Our final destination will be Baghdad, the decisive battle will be there.” As ISIL continues to take villages further south of Mosul, slowly bridging the gap between Baghdad and its controlled territory, Iraqi officials become more concerned that an impending battle is coming.

In response to this threat, government and Shiite religious leaders in Baghdad have delivered a call to arms. As seen in the image above, people from across the region have been mustering for the impending battle. During Friday’s prayers, Baghdad religious leader Grand Ayatollah Ali Sistani issued a call to arms. The New York Times quotes him as saying that it is “the legal and national responsibility of whoever can hold a weapon to hold it to defend the country, the citizens and the holy sites.”

5. U.S. Is Sending an Aircraft Carrier to the Persian Gulf as Obama Weighs Options

President Obama said on Friday that the United States would not send troops to Iraq, but did say he is weighing other options in how to assist the Iraqi government. Meanwhile, CNN reports that the American aircraft carrier George H.W. Bush is being moved into the Persian Gulf in case the president should decide airstrikes may help defeat the ISIL offensive. This comes amid public anxiety that any new intervention could suck the U.S. back into a renewed armed conflict in the Middle East. 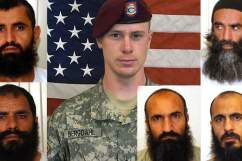 Loading more stories
wpDiscuz
4
0
Would love your thoughts, please comment.x
()
x
| Reply
ISIL, or ISIS, known as the Islamic State of Iraq and Syria, or the Levant, captured Mosul, parts of Northern Iraq, and may head to Baghdad. The group's fighters are known for ruthless tactics.