Cops identified 15-year-old Jared Michael Padgett as the heavily armed gunman who shot and killed a 14-year-old student inside an Oregon high school Tuesday before killing himself.

The shooting took place Tuesday morning at Reynolds High School in the Portland suburb of Troutdale, marking the 74th school shooting in the United States since the Sandy Hook Elementary School slayings in 2012.

Cops identified Padgett, a freshman, as the shooter in a Wednesday morning press conference that you can watch in the video above.

1. Padgett Took the Bus to School With a Guitar Case, Duffle Bag & AR-15

Police said Padgett was wearing a vest and camouflage helmet and armed with an AR-15 rifle with nine loaded magazines capable of firing hundreds of rounds. He had taken the bus to school carrying a guitar case and duffle bag, cops said.

Padgett shot popular 14-year-old soccer player Emilio Hoffman to death in a locker room adjacent to the school’s gymnasium and shot and wounded gym teacher Todd Rispler, who had heard gunshots and come to investigate.

The Oregonian reported that Padgett was putting on his vest and helmet in the locker room when Hoffman walked in, apparently merely at the wrong place at the wrong time.

Rispler, a Reynolds High grad who quarterbacked the school’s football team in the ’80s, was grazed in the hip by a bullet fired by Padgett as he started to run for help, but still managed to find his way to the school’s administrative offices and warm officials that Padget was on the loose — a maneuver that cops say likely saved countless lives.

Todd Rispler was shot but managed to get to the school’s offices to warn others. (Twitter/@BillieJeanBrown)

After Rispler notified officials there was a shooter on the loose, teachers locked their doors and officials called the police.

Officers responded and confronted Padgett, who had made his way from the detached gymnasium into the hallway of the main part of the building. Cops then cornered Pasdgett in a bathroom, where the shooter hid in a stall and fired through the stall at an officer, who fired back, the Oregonian reported.

Padgett was found slumped over on the toilet, dead of what the medical examiner ruled a self-inflicted wound from the AR-15. The Oregonian reported Padgett also had a minor wound to his left heel from a bullet fired by the officer.

2. Padgett Was an ROTC Platoon Leader & His Brother Served in Afghanistan

According to classmates, Padgett was a member of the school’s Junior Reserve Officer Training Corps, whose recruitment video you can watch above. The video starts by asking “does your life have no meaning” and then pictures a despondent-looking boy banging his head against a wall.

A student with the Twitter handle @josiee_man tweeted that Padgett was his platoon leader and would always mark him on time even when he showed up late.

Fuck I had JROTC with Jared brooooooo he was fuckin chill!!!!!! Always marked me on time when I would show up late af! HE WAS PLATOON LEADER

Jared Padget’s brother, Lucas, is an Army veteran who served in Afghanistan, according to his Facebook page.

He also liked the page M4 Assault rifles, Gwacs Armory, ATI Gunstocks, Black Aces Tactical, and Remington Arms Company and body armor companies such as AR500 Armor. He also liked political pages such as as, “Conservative American Military Veterans Against Barack Obama” and, “We WILL NOT Be Disarmed.”

4. He Was a Deacon in the Mormon Church

The Hartley Park Ward of the Mormon Church, in Gresham, Oregon. (Google Streetview)

Padgett was a deacon in a local ward of the Mormon church, an acquaintance told the Oregonian.

Earl Milliron, 86, told the paper Padgett’s family attends the Hartley Park Ward in Gresham, where Padgett served as a deacon, a level of priesthood that boys are eligible to enter starting at age 12.

To become a deacon, a boy must be interviewed by the bishop and prove that he’s worthy. If he’s found worthy, he’s ordained by the laying on of hands.

Milliron told the paper that Padgett’s family has had its share of “ups and downs over the years” and that the teen’s parents, Michael and Kristina, broke up four or five years ago.

5. Padgett’s Friend Said the Shooter Looked ‘Pissed Off’ When He Saw Him Just Before the Shooting

On the day of the shooting, a friend of Padgett’s posted on Facebook asking had anyone seen his friend.

“I saw him today when I was walking to my 7th period class … I do not know but he looked mad really really mad like pissed off,” he wrote.

Jared’s sister expresses worry on Facebook in the wake of the shooting.

His pregnant sister, Chelsea Cooper, posted a Facebook status saying how worried she was about the ongoing situation at Reynolds High School on June 10.

A friend then posted on Cooper’s Facebook thread, asking “how can 1 family be so close to 2 public shootings?” According to Jared Padgett’s Facebook page, he lives in Clackamas, Oregon, the scene of a 2012 mall shooting.

One of Padgett’s classmates told the Oregonian Padgett occasionally lost his temper, and that one such occasion came in the past week or so, when Padgett grew angry after giving a presentation in a language arts class on a book about Adolf Hitler.

The student, 15-year-old freshman Kayla Ensign, told the paper Padgett, talking about the Holocaust, something like “this is life now” and “everything really does happen for a reason.”

Some of Padgett’s classmates disagreed with parts of the presentation, which Ensign said promoted Padgett to get “really uptight” and start raising his voice. 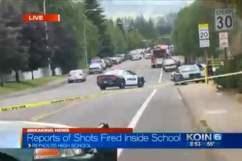 Jared Michael Padgett: The Photos You Need to See

Loading more stories
wpDiscuz
1
0
Would love your thoughts, please comment.x
()
x
| Reply
Jared Michael Padgett has been named as the shooter at Reynolds High School in Troutdale, Oregon. He was armed with an AR-15 and wearing a bullet-proof vest.