Jean Kasem has been in the news lately for after clashing with her husband’s Casey’s children regarding their father’s well-being. Jean Kasem and Casey’s daughter, Kerri, have clashed over disagreements about Casey’s care, and the feud got nasty — and bizarre — when Jean threw a package of raw meat in Kerri’s direction after Kerri showed up at her father’s Washington state home with an ambulance to take Casey to the hospital.

According to the New York Daily News, Jean Kasem had prevented her husband from having any contact with his children. A judge in Kitsap County, Washington recently ruled Kerri Kasem could bring her father to a doctor of her choosing for a medical exam, which led to the raw meat incident, according to The Daily Mail.

Here’s what you need to know about Jean Kasem:

1. She Threw Raw Meat at Casey Kasem’s Daughter & Said the Bible Inspired Her to Do It

According to the New York Daily News, Kerri Kasem arrived with paramedics arrived at Jean and Casey Kasem’s home Sunday in Kitsap County, Washington on Sunday to transport the ailing DJ to the hospital. The News reported that Kerri testified at a hearing last week that a doctor hired by Jean Kasem found that Casey had suffered from bed sores and infections in his lungs and bladder, necessitating the trip to the hospital.

Jean Kasem became so enraged that she threw a pound of raw hamburger meat in Kerri’s direction, then saying the Bible commanded her she throw the meat. NBC News reports:

After Casey Kasem was gone, Jean Kasem told NBC News that she was following a King James verse when she threw the meat at her stepdaughter.

“In the name of King David, I threw a piece of raw meat into the street in exchange for my husband to the wild rabid dogs,” she said.

3. She Worked as an Actress

Before marrying Casey Kasem, Jean Kasem worked as an actress, most famous for her role in the ill-fated Cheers spin-off, The Tortellis. She played Loretta Tortelli, the new wife of Carla’s ex-husband, Nick Tortelli, according to IMDb.

4. She Owns a Crib Company

According to Examiner.com, Jean Kasem is the owner of Little Miss Liberty Round Crib Company, which designs round and heart-shaped infant cribs. Kasem apparently bragged about being tapped to join the cast of Bravo’s The Real Housewives of Beverly Hills in 2013, but that never happened, Eonline reports.

@KerriKasem on behalf of myself and all AT40 superfans, CONGRATULATIONS. Now lets find him and get him home to you. This lady is a psycho

In her role as Kasem’s caretaker, Kerri will now have access to her father’s treatment records, according to the Associated Press. 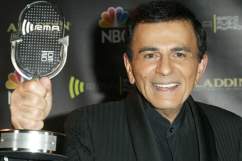