The 24-year-old man who shot five police officers and killed three of them was captured early Friday morning after a manhunt that began Wednesday night and brought a major Canadian city to a standstill.

Justin Bourque arrested by RCMP at 12:10 in Moncton. He is in police custody. Residents of north Moncton can now leave their homes.

He was in my backyard. I saw him arrested in front of my eyes. He is alive. Thank you #RCMPNB.

Michelle Thibodeau, whose Twitter and Facebook profiles describe her as a singer/songwriter/actress, tweeted that Bourque surrendered to a RCMP SWAT team in her back yard after cops surrounded the suspect and started screaming at him to surrender.

Thibodeau told reporters in Canada that the arrest happened after a truck full of RCMP officers pulled up to her house and the officers emerged in her back yard, closing in on Bourque and screaming at him to surrender. Bourque then put up his arms and said “I’m done” before being taken into custody.

She’s scheduled to play in a concert Sunday to benefit a school construction project in the Dominican Republic.

2. Cops Had a Building Surrounded Thursday, Only to Find Bourque Wasn’t There

The arrest came about 10 hours after heavily armed police officers swarmed a building in Moncton where Bourque was believed to be hiding.

Local media outlets heeded the requests of police and did not report the exact location of the building in order to protect the officers’ safety. But after more than an hour on scene, cops left without apprehending a suspect.

3. The Arrest Capped a Day of Terror in Moncton

The arrest enabled terrified residents of Moncton to finally emerge from their homes after cops issued a shelter-in-place order for a large portion of the city of 70,000, which is a major commercial hub in the province of New Brunswick.

Residents had been holed up in their homes all day watching the manhunt unfold on TV and social media.

I personally am in less danger now than last night, but I'm more scared today.

Heavy police presence at apartment complex in #moncton, not tweeting location at request of police. Pics and video to come when ok to do so

4. The Manhunt Lasted More Than 28 Hours

Bourque, wearing military fatigues and a black headband, was spotted in various locations Wednesday night armed with at least two rifles, along with other weapons. Cops believe he also had a large amount of ammunition.

Police said during a Thursday morning news conference that Bourque was spotted Thursday morning after daylight but cops were unable to apprehend him. The suspect was seen at about 7:30 a.m. local time, and that was the last time he was positively identified, according to Brown. Cops also had two other unconfirmed reports that Bourque had been spotted.

Bourque was not on police’s radar prior to the rampage, officials said.

Cops said they initially received a call Wednesday night from a person who spotted a man walking around with a run. When officers responded, Bourque began shooting.

It’s not clear where Bourque got his weapons. CBC reporter Bobbi Jean-MacKinnon tweeted that Worlds End Warehouse, a local gun store, has no record of Bourque being a customer, although some of the store’s employees knew him.

5. Schools Are Still Closed Today, but a Shelter-in-Place Order Has Been Lifted

A shelter-in-place order that had been in effect during the manhunt for a designated area of Moncton (pictured in the map above) has been lifted, and municipal services will resume Friday, according to city officials.

School officials had already canceled Friday’s classes during the manhunt, so schools will remain closed as scheduled. 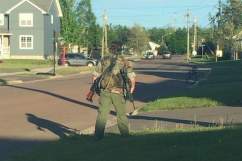 Justin Bourque Photos: The Pictures You Need to See 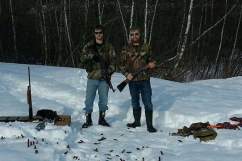