Kimberly Crew has been a WAG for several years, so she’s no stranger to the limelight. But with her toned, tanned legs and long blond hair, the cameras can’t seem to get enough. She and Manchester City goalkeeper Joe Hart have been together for about five years, and it doesn’t look like she’s going anywhere.

Here’s what you need to know about the British bombshell.

1. They Recently Got Engaged

The ‘WAGs’ to watch out for at the FIFA World Cup: Kimberly Crew and Joe Hart http://t.co/zy5t7f2sOx pic.twitter.com/oyggPzvo2v

No more sitting on the wife sidelines for Kimberly Crew. While the couple was recently vacationing in sunny Cabo, Mexico for Crew’s birthday, Hart reportedly got down on one knee. He planned the gesture with a ring worth more than $42,000, and popped the question while they were out on a yacht. How could she say no? The Sun reported that the happy couple celebrated their engagement with a romantic candlelit dinner on the beach.

2. Hart & Crew Have Banned Babies From The Wedding

In June, one year before the couple’s wedding is supposed to happen, SportsMole reported that the wedding invitation clearly stated to all guests “Sorry No Bambinos.” Perhaps the reasoning behind this is because it’s a destination wedding—it’s expected to take place in Tuscany, just like where Hart’s teammate Theo Walcott was married last year. One guest told the Business Standard that it “was a really unusual order.”

3. No Babies At The Wedding, Except Their Own?

The fact that Crew and hart have disallowed babies from their ceremony does not account for the fact that the couple is expecting a child of their own in September. Their child, this means, will be nine months old when its parents tie the knot—though it’s unsure if their own child will be allowed to attend the Italian festivities.

4. She Stuck By Hart In His Bad Boy Days

With a wedding looming and a baby on the way, it could be that Hart is ready to settle down. Yet throughout their half-decade relationship, reports have surfaced of Hart’s less-than-savory behavior, though whether or not he was cheating was never confirmed. In 2010, for example, a very drunk Hart was caught on video by a “disgusted fan” while swaying on the bar with two blondes on his arms. The story was sold to tabloids and created a bit of a scandal, but Crew stuck with him. These days the couple reportedly prefers quiet nights in at home together.

5. Crew Makes A Living As A Beautician

This makes sense—what do the beautiful know how to do better than beauty? We’d trust this gorgeous girl to make us up any day. It’s unsure if Crew will continue to work after she gets married and gives birth, but it’s not as if the family will need the money. 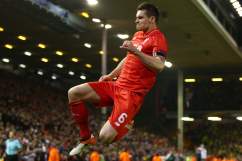