The Los Angeles Kings took a huge step towards winning the Stanley Cup for the second time in three years. The team from the City of Angels bossed and frustrated the Rangers as they ran out 3-0 winners in Madison Square Garden. The Kings had goalie Jonathan Quick to thank for the shutout as he thwarted every thing the Rangers could think of. New York will also have to think seriously about their penalty play, six times they had a man extra and failed to make it count.

Here’s how it all went down in MSG:

The Kings swatted away six penalties during Game 3. It was outstanding, although you would wonder where they would be without Jonathan Quick? Of course, if my auntie had balls…

Jimmy Fallon was in attendance, despite what went on on the ice, he seemed happy.

Not even Bryan Cranston could will the Rangers to score:

For a team that was down 3-0 in the game and in the series, the New York Rangers Twitter was still mad excited:

Kill!!! great job by McDonagh clearing puck out of crease..back to 5 on 5 #NYRCupFinal

Kreider in an act of supreme frustration is sent off for pushing Doughty into Quick. A resulting power play for the Kings came to nothing but that was the first (and only) act of petulance.

Everything Quick did tonight was perfect, but this particular save was beyond perfect:

The third period began with, yes you guessed it, another great save from Jonathan Quick, this time he thwarted Krieder.

At the end of the second period you could hear the music clearly pumping through the MSG sound system. The crowd were dead. It was 3-0 to the Kings going into the third period.

GOAL! A breakaway goal from the Kings thanks to Mike Richards with an unstoppable shot. 3-0, it really looked all over at this stage.

With just over five minutes left in the second, Lundqvist was forced into his best Quick impression as he denied Jeff Carter with a great save.

Matt Greene was untouchable at PKing for the Kings tonight.

This is vintage 2012 Jonathan Quick.

Every Rangers fan in the world had to be wondering how their team didn’t manage to score during one of their 140,000 power plays.

Just as a Rangers power play ended Brassard was denied at the doors step by Quick. Seriously, the Kings goalie is playing superhuman hockey tonight.

Richards and Brassard were denied in quick succession by outstanding goal tending by Jonathan Quick. Rangers managed five shots during one of their more successful power plays.

Goal shot for the Kings second looked like it took an early deflection off Jeff Carter but replays show it belongs to Jake Muzzin.

GOAL! Power play goal from the Kings, Muzzin shot went in after it took a deflection off Rangers Marty St. Louis.

Celebrity spotting at the Garden, Glenn Frey of The Eagles was in attendance:

Glenn Frey of the Eagles at MSG for Rangers-Kings pic.twitter.com/kgE0KMRRLc

With just 59 seconds gone in the second period, Ryan McDonagh was ordered off for the Rangers for high sticking Anze Kopiter.

Jeff Carter took some bizarre photos in the tunnel pre-game, maybe he knew it was going to be his night?

At the end of the first period, it’s 1-0 to the Kings. The team from Los Angeles started better but the Rangers ended the period stronger. The New Yorkers failed to capitalize on their power play and it came back to bite them in the you-know-what.

The #Kings are in trouble! They are leading 1-0 at the end of the 1st period. How can they comeback if they are leading? #StanleyCup

Our next @CoorsLight #ColdHardFact looks at the 1st goal of Game 3 of the Stanley Cup Final pic.twitter.com/uj5lCscfGe

GOAL! 1-0 to the Kings! Jeff Carter scored right at the buzzer. It went under review but it crossed the line at 0.7 seconds.

The Rangers pretty much finished the first period with a power play thanks to Willie Mitchell’s high-sticking. We all remember how awful New York was at power playing during the regular season.

I don’t think Mats Zuccarello could have gotten much closer than this:

The lack of stoppages during the first period didn’t help New York. That’s something that’s likely to favor the Kings as the Rangers love their hard-sprinting.

Here’s the amazing opening to the game:

The Kings former Ranger, Marian Gaborik, drew heat from the MSG crowd when he gets on the puck.

The crowd was predominately in favor of the Rangers, but there were some subversives.

We don’t know when the server went back up at the Garden yet, but the Kings players must have known, Yasiel Puig was sending his love:

The server was down at the Garden meaning that there were no stats immediately available other than the fact with six minutes played, it was 0-0. The Kings started the better team, leading the shot count 3-2.

Singing the national anthem tonight was John Amirante, of course.

Anyway this is the first Cup Final game at MSG in 20 years, which is awesome

Just a reminder that this was the first time in 20 years that the Stanley Cup Finals were at Madison Square Garden. Back then, OJ Simpson was in the news and the World Cup was about to start. Strange times.

So apparently Coors Light are getting in on the sports stats game:

We’ll be sharing a #ColdHardFact from @CoorsLight throughout Game 3 of Rangers-Kings. Our 1st is a history lesson… pic.twitter.com/btyX5sdGXu 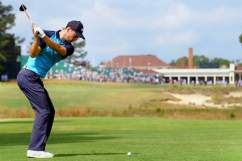