Kyle Schwarber was picked 4th overall in the 2014 MLB Draft by the Chicago Cubs. The midwestern native has just finished his Junior year playing for Indiana University, choosing to head to the major leagues instead of finishing up his final year.

Schwarber is the most advanced approach at the plate … they think he’s the best hitter in the draft.”

Gammons is known to be close with Cubs president Theo Epstein through a connection with their passion for music. The friends also participate in raising money for charities together such as The Jimmy Fund.

So cool that @pgammo and Theo Epstein have kept Hot Stove, Cool Music alive. Kudos to @LenKasper for making it truly an inter-league event.

Epstein is famous for building farm systems and drafting good players, which he did with the Boston Red Sox. In the past he has drafted Dustin Pedroia, Jacoby Ellsbury and Jon Lester, among others. After he built up the Red Sox roster which made them into last year’s World Series Champions, he went to the Cubs at the start of the 2012 season and is trying to build their system up as he did for Boston.

Here’s what you need to know about the IU Hoosier’s catcher.

1. He Attributes His Success in Baseball to Living in the Midwest

Schwarber is extremely proud of his midwestern roots. He was born and raised in southwest Ohio and went on to attend Middletown High School where he played baseball and was recruited by the Indiana Hoosiers. Schwarber is a hometown hero and success story, although many of his teammates from high school followed a successful path through baseball too.

I owe a lot to my upbringing.”

And part of that is the whole Midwest thing. We play good baseball in the Midwest. Coming up with the Middie Pride and the Cincy Flames and playing in the GMC, it all really helped me. The quality of the pitching is good, and so is the competition. Middie Pride is where it all started, playing with a great group of guys when I was little.”

In football, the middle linebacker is the field captain, and it’s the same for a catcher in baseball –you’re the field manager,” Schwarber said. ”You control the staff – they trust you, and you trust them – and you have to know where everyone’s is playing. You direct it. It’s a big responsibility; I love it.”

Catching is what I really want to be doing… There’s no other position I want to play. I like catching because it’s down and dirty and gritty. It’s an awesome position.”

After Schwarber was drafted as the fourth pick for the cubs, John Hart said:

He’s a great teammate, makeup off the charts. i think it’s a good pick.”

3. Johnny Bench is His Role Model

When Schwarber was 8 years old he picked up baseball and his catching position. The baseball star has always had a close connection with his grandmother who encouraged him to have high aspirations for the game even at a young age.

Schwarber recalled in an interview what his grandmother said to him then:

When schwarber asked who that was, she responded:

The best catcher to ever play the game.”

Since then Schwarber has looked up to him and other catchers alike, but still plays with his own style.

4. He Was Relatively Unknown Going Into College

WATCH what @HoosierBaseball, Sam Travis and Kyle Schwarber had to say after tonight's game #iubase http://t.co/GzuRzTZBdC

When Indiana University Hoosiers baseball coach, Tracy Smith went to recruit, no one was fighting over Schwarber. Schwarber’s high school coach asked Smith, who’s wife was from the same hometown, to look at the talented catcher who was not being scouted by any colleges before.

It’s still amazing when I think back to recruiting him. It wasn’t like we had to beat out a bunch of people to get him. He was a relatively unknown player, thank goodness.”

5. He Had A Hard Time Choosing the Draft Over His Senior Year at IU

The pros took notice of the Schwarber because of his skills with a bat.

Peter Gammons said after he was picked fourth:

“There are so few young hitters coming into the game. Eventually when they’re ready to make a move they can trade bats for pitchers who are already in double-a or triple-a, not in high school.”

The ball sounded a little different coming off his bat.”

Schwarber’s size and football background are another plus to scouts. The lefty catcher was also a second-team all-state middle linebacker in Ohio, which is known for it’s skilled high school football players specifically linebackers. Standing at 6 feet and weighing 240 pounds, Schwarber was made to be a ball player with his wide, big boned structure and proven strength in the batter’s box.

Schwarber speaks passionately about his college team, saying how much he will miss them and the difficulty of leaving prior to senior year, however he believes he is making the right decision by moving forward and becoming a part of the Major Leagues. 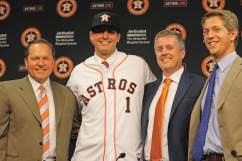 How to Watch the 2014 MLB Draft Live Stream Online

Read More
5 Fast Facts, MLB, Sports
Kyle Schwarber was drafted fourth overall in the 2014 MLB Draft by the Chicago Cubs. Here's what you need to know about the IU Hoosier's catcher.