Lionel Messi, captain of the Argentina national team and ranked by many as the best soccer player in the world, is back in action after an injury earlier this year had Argentine fans nervous. Messi, who plays for club Barcelona in the regular season, suffered a torn hamstring last November that benched him for several weeks.

Here’s what you need to know about this devastating injury that almost sent the world’s best player into the stands.

1. He Tore His Hamstring

The first time Messi injured his hamstring was at the end of September, on his right leg. The injury that put Messi on the bench occurred just 21 minutes into a Sunday afternoon game in November against Real Betis. Formal reports weren’t issued until the following Monday, when club physicians announced that Messi had indeed torn a muscle in the femoral bicep of his left leg. According to the American Academy of Orthopedic Surgeons, this type of injury is very common and can be fixed without surgery, luckily, but it required inactivity, rest, and physical therapy to fully heal.

2. It Ended A Consecutive Record-Setting Streak

When Messi tore his hamstring, he had recently become the first player in history to score a goal in consecutive matches against every team in a professional soccer league. The historic score—in the 19th consecutive game—was during a Barcelona–Celta Vigo La Liga match. Though it wasn’t enough to tip the victory to Barcelona that night, Messi went down in the record books nonetheless. He extended his own record to 21 consecutive matches before the torn hamstring ended his streak.

3. His First Game Back With Barcelona Was A Win

Messi managed to put two in the net after a 59-day absence in his first game back after the injury. These goals led Barcelona to victory over Getafe in Copa del Rey, although Messi appeared in the game only as a second-half substitute. Though some critics said that Messi was risking another injury by playing so soon after recovery, Barcelona coach Gerardo Martino told the BBC that, “he has told me he is feeling fine and that’s why he is in the squad.”

4. The Injury May Have Cost Messi His Fifth Ballon D’Or

Anyone who claims Messi isn’t the world’s best player will usually stake a claim with Portuguese Cristiano Ronaldo, who plays for Messi’s rival club team, Real Madrid. Messi has taken the Balloon D’Or (World Footballer of the Year) for the past four years, and was unseated by Ronaldo in what would have been his fifth annual win. When the award was announced in January, Messi had just returned to the field. The comeback, however, wasn’t enough and Ronaldo retook the trophy for the first time since 2008.

5. Injury? What Injury? Qualifying For The World Cup Is No Big Deal For Messi

In early June Messi, still playing as a substitute, scored his 38th goal for his national team for a win over Slovenia that sent Argentina to the 2014 World Cup finals. The goal was the first for Messi in an international World Cup qualifying match since before his first injury in September 2013, when he kicked a goal that led Argentina to victory over Paraguay. Leading into the final games of the Cup, however, Messi looks poised to be his same old record-breaking self. 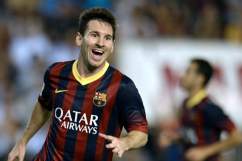 Loading more stories
wpDiscuz
6
0
Would love your thoughts, please comment.x
()
x
| Reply
Lionel Messi is Argentina's, arguably the world's best player. Last year he was out for nearly eight weeks—here's what you need to know about the injury that put him on the bench.