Maiko Maya King, pictured above, is suing embattled Los Angeles Clippers owner Donald Sterling for the racist and sexist remarks he made to her while she worked for him. TMZ reports King was in a relationship with Sterling from 2005 to 2011 and was fired when she rejected “a stream of racist and sexist taunts.”

Here’s what you need to know about King:

1. Sterling Asked King How She Could ‘Marry a Black Man’

According to the lawsuit filed in Los Angeles County Court, Sterling asked King several racist questions during their relationship and duration of her employment including, “How could you be married to a black man?” and “How could you bring black children into the world?” in reference to King’s children. The lawsuit also claims Sterling said to King, “I want to take you out of the black world and put you into the white world.”

2. Her Lawyer is Gloria Allred

Gloria Allred is the filing attorney on King’s case, according to the signed court documents pictured above. Allred is known for taking on controversial cases, many of which take on issues of womens’ rights and discrimination. <a href="“>Allred served as council for the family of Nicole Simpson, the slain wife of OJ Simpson. She also represented Mel B., a.k.a. Scary Spice, when she filed a paternity suit against Eddie Murphy after the birth of their child in April 2007.

The lawsuit says Sterling introduced King to his girlfriend, “V.” when she
began working for him again, in spite of their previous romantic relationship. According to the document, Sterling would get angry with King after she refused to perform certain tasks, saying V would do them. King then responded to Sterling by telling him to go get V.

4. She Worked as Sterling’s Director of Charities

According to King’s LinkedIn profile, she started working as the Director of Charities for the Donald T. Sterling Charitable Foundation, which grants funds to charities in the greater Los Angeles area, in 2005. She is also the Founder and Executive Director of the Circle of Charities Foundation, which she promotes in the video above, and owns a nightclub in Santa Monica, California called Harvelle’s.

Maiko Maya pictured with Vivica Fox at The Diamond in the Raw Celebrity and Stuntwomens Awards in 2011. (Facebook)

King is an artist and features several of her paintings on her website. She also writes her own poetry which can be found on her site. 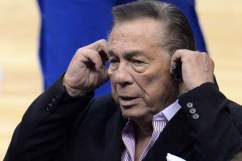 Loading more stories
wpDiscuz
0
0
Would love your thoughts, please comment.x
()
x
| Reply
Maiko Maya King, a former employee of Donald Sterling, is suing the disgraced Clippers owner claiming she was subject to "racist and sexist taunts" while she worked for him. The suit also alleges Sterling forced King to perform sexual acts in order to receive her pay.