No. 24 in the world Martin Kaymer is leading the field at the 114th U.S. Open by 5 strokes going into his final round. The German is going for the second Grand Slam victory of his career.

1. He Is Going For a Wire-to-Wire in the US Open

Out of the last 9 leaders in the US Open that were ahead through the third round, only two players have managed to finish the tournament with the win- Rory McIlroy and Tiger Woods.

A wire-to-wire win is no easy feet in a tournament such as the U.S. Open where everytop player in the world is gunning for the number one spot.

Kaymer has a 5-stroke lead giving him a high chance of finishing up first with the 3rd wire-to-wire win in the last ten third-round leaders.

Kaymer has been going strong for through the first three rounds of the U.S. Open with two 65s on the first two days leaving him ten under by Day 3. This has never been accomplished in the U.S. Open. On the third day, Kaymer looked as if he was going to fall apart after taking an unplayable on hole No. 4.

Kaymer still managed to finish the day with a +2, 72 to leave him at -8 going into the final round, 5 strokes ahead of Rickie Fowler and Erik Compton who sat at -3 going into Day 4.

In 2011, Kaymer was playing at his peak, eventually making it to the No. 1 spot in the world in 2011, a year after his first Major Championship win at the PGA Championship. Although he turned down the opportunity to become a full PGA Tour member, he was still participating in U.S. events while playing in the European Tour.

He achieved the number one spot after winning runner up in the WGC-Accenture Match Play Championship, but the spot was taken from him just 8 weeks later by Lee Westwood.

Before Rory McIlroy, he was the second youngest No. 1 ranked player in the world after Tiger Woods.

The public finally figured out that Kaymer and his girlfriend, European Tour player Allison Micheletti, were no longer together when she was seen in public with former NHL star, Mike Modano. Micheletti was even tweeting pictures of her and her new hubby while Kaymer remains single for the time being.

In 2010, Kaymer won his first Major Championship on the PGA Tour. His win was a notable one at Whistling Straits where he beat Bubba Watson in a three-hole playoff by tapping in a two foot putt to clinch the victory.

At the time, Kaymer at 25-years-old was not ranked while Watson was No. 8 in the world. Needless to say he shocked the world of golf.

I don’t realize what happened. I just won my first major. I’ve got goose bumps just talking about it.” 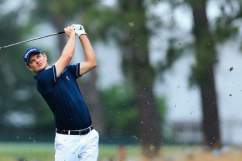 Read More
5 Fast Facts, Golf, Sports
Follow Heavy ↓
No. 24 in the world Martin Kaymer is leading the field at the 114th U.S. Open by 5 strokes going into his final round. The German is going for the second Grand Slam victory of his career.