Nik Stauskas was chosen 8th overall in the 2014 NBA Draft by the Sacramento Kings. The Canadian standout is coming out of the University of Michigan and is 1 of the 4 internationals in the top 8 draft picks.

1. He Was the No. 8 Overall Pick By the Sacramento Kings

Michigan’s best player was chosen 8th overall by the Sacramento Kings. Some critics are saying he was picked too early although he is ranked as the top shooter in the draft class.

Kings: Nik Stauskas: D+: Better talent here. Stauskas is slow to move and could struggle with the ball. Could have find another shooter..

2. He Was Voted Big Ten Player of the Year

Stauskas was the 2014 Big Ten Conference Men’s Basketball Player of the Year along with NCAA All American second team selection.

He was voted first-team All-Big Ten selection by both the coaches and the media unanimously to mark the fifth time a Michigan player was named B1G player of the year for the second year in a row.

Stauskas was born in Ontario, Canada from parents Paul and Ruta Stauskas, however three of his four grandparents lived in Lithuania before World War II.

Stauskas has dual-citizenship in Canada and Lithuania, but has represented Canada in basketball as a youth.

4. He Is Considered the Top Shooter in the Draft

John Beilein, coach of the Michigan Wolverines told Josh Robbins of the Orlando Sentinel that in Stauskas’ first ever practice in 2012 Stauskas walked up and sank 78 of 85 shots at the 3-point line.

He backed up this performance by shooting 44 percent from 3-point range his first year and improving to 44.2 percent his second year.

Without my ball-handling and my play in pick-and-rolls and things like that, I can immediately be a guy who can stretch the floor and make shots. That’s something I’ve always been able to do.”

5. His Girlfriend is a Freshman at Toledo

Taylor Anderson is going to be a sophomore at the University of Toledo and is constantly instagramming photos of her and her hubby. The blonde bombshell can always be found on the sidelines of every Michigan game cheering for Stauskas and was immediately a sensation thanks to her good looks.

Since @NStauskas11 left this at my house I will now be taking offers.Bag of smelly gear goes to the highest bidder?? pic.twitter.com/J16SFIF4GS 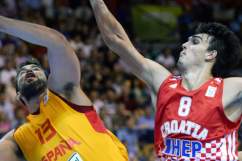 Read More
5 Fast Facts, Basketball, NBA, Sports
Nik Stauskas is another international looking to join the NBA. The University of Michigan standout is predicted to be a top 10 pick in the 2014 draft.