Noel Estevez is charged with manslaughter in the death of classmate Timothy Crump, whom Estevez claimed had repeatedly bullied him. Cops said Estevez repeatedly stabbed Crump in the stomach as students at Intermediate School 117, a Bronx middle school, looked on.

Because of the severity of the crime, police are charging Estevez as an adult.

Here’s what you need to know about Estevez:

1. Estevez Told Family Members He Was Bullied So Severely He Was Afraid to Go to School

Adults close to Estevez told WABC Crump had tried to rob Estevez in the past, leaving bad blood between the boys. A group of students harassed Estevez so intensely that he was afraid to go to school. He even had an Administration of Children’s Services officer go to school with him because he was so terrified. According to WABC, the school principal was aware of the bullying and Wednesday was Estevez’s first day back in school for quite some time. A family friend said:

He talked to various people. He told his dad, he told his mom, he even told us. He told ACS, he told everyone, the whole neighborhood, he said listen, I’m scared, I’m afraid to go to school.

2. His Mom Was Recently Arrested on Drug Charges

Timothy is one of the kids that is constantly bullying Noel. (He would say) things like, ‘Ha ha, your mom’s a crackhead, you’re stuttering, you don’t got no food stamps, you’re mom’s locked up!’

3. He Tried to Hang Himself With a Rope 2 Weeks Ago

Praying for Timothy Crump's family. RIP kid — as someone who's worked with youth in the past – They need our #help. #tragedy #Bronx #peace

Marisol Perez, a parent of a classmate of Estevez’s, told the New York Daily News Estevez tried to kill himself as recently as two weeks ago. She said:

Two weeks ago he tried to hang himself in his own apartment. His father found him hanging himself in the closet with a rope.

4. Crump Was Described as a ‘Good, Humble Kid’

People close to Crump described him as a good kid who wasn’t a troublemaker. One of Crump’s neighbors, Tryone Rivers, said of Crump:

He didn’t bully nobody. He had mad respect for his elders. He don’t like bulliers. He’ll try to, if he see that you’re being bullied and you can’t defend yourself, he’ll be right there to help you out.

Crump’s next-door neighbor, Vincent Rosario, told Am New York, “he was a good kid, a humble kid,” and that Crump was always with his mom. He would have graduated eighth grade next week, according to CBS News.

5. Grief Counselors Are at the School

According to The New York Times, grief counselors will be at the school on Thursday to help any students who need it. Carmen Fariña, chancellor of New York City’s school, said in a statement, “We are devastated to lose one of our children like this.” Estevez has been charged with second degree murder and manslaughter, reports CBS News. 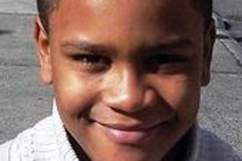