Ruby Dee, Ossie Davis’ wife of 56 years, died of natural causes Thursday morning in New Rochelle, New York. She was 91. Davis died in Miami, Florida at 87 nine years earlier. The couple not only acted together on stage and screen, but fought social injustice together and even co-authored a book.

1. They Met on Broadway

Davis and Dee met while working on Broadway in 1946. The two were cast in the play, “Jeb,” which only lasted one week. After “Jeb’s” early closing, the Davis and Dee toured together as part of the cast of Anna Lucasta, which follows the life of Anna Lucasta, a prostitute seeking forgiveness from her family.

Davis and Dee appeared on Broadway in different plays after Anna Lucasta. Davis portrayed the title character in the show, “Purlie Victorious” in which he shared the stage with actor Alan Alda. Dee went on to star opposite Sidney Poitier in Lorraine Hansberry’s “A Raisin in the Sun.” In the video above, Davis and Dee shared a scene in the show, “Two Hah Hahs and a Homeboy.”

2. They Were Civil Rights Activists

Both Dee and Davis were very active in the Civil Rights Movement, befriending Dr. Martin Luther King Jr. and Malcolm X as part of their work. The two acted as masters of ceremonies during the 1963 March on Washington and spoke at the funerals of Dr. King and Malcolm X.

Their civil rights efforts continued well past the 1960s. The couple was arrested in 1999 after protesting the death of Amadou Diallo, an unarmed African immigrant who was killed by police gunfire. All four of the officers involved in Diallo’s death were acquitted at trial.

3. They Co-Hosted a Television Show

Davis and Dee hosted “With Ossie and Ruby” which aired on PBS from 1981-1982 and again in 1985. They not only produced the show, but hosted and acted in the show. Some of “With Ossie and Ruby’s” most notable guests include Angela Bassett and Scatman Crothers, according to TV Guide. The video above shows an excerpt of the show featuring Dee and Davis.

Ossie Davis was inducted into the American Theatre Hall of Fame in 1994. Ruby Dee won several awards individually, including an Oscar nomination for Best Supporting Actress in “American Gangster” in 2007, a Grammy and an Emmy. She and Davis won several awards as a couple, including being inducted into the NAACP Image Awards Hall of Fame, the National Medal of Arts and the Kennedy Center Honors.

5. They Had an Open Marriage

Davis and Dee had an open marriage, which they discussed in their autobiography, “With Ossie and Ruby: In This Life Together.”

Davis’ description of the marriage reads:

It occurred to us, from observation and reasoning, that extramarital sex was not what really destroyed marriages, but rather the lies and deception that invariably accompanied it — that was the culprit. So we decided to give ourselves permission to sleep with other partners if we wished — as long as what we did was honest as well as private, and that neither of us exposed the family to scandal or disease.

Dee described the relationship as follows:

But, we both came to realize that we were very fortunate that, in all of the deep profound, fundamental ways, we really, really only wanted each other. It was like a rediscovery of something from the beginning. It’s not something that you’d recommend to everybody. But often Ossie has said – and I’ve though too – the best way to have somebody is to let it go. 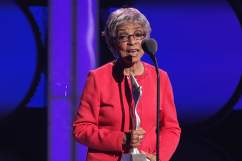