Mother of Jesus: Pilger NE after two tornadoes touch ground at once [via @ninatypewriter and @reedtimmerTVN] pic.twitter.com/yNyQ7du9Rp

The small town of Pilger was leveled on Monday as fierce twin tornadoes tore through northeast Nebraska. “It was like God dragged two fingernails across the land,” one witness told the Norfolk Daily News.

The devastation is staggering, the injuries are many, and it’s unclear if anyone is still missing in the rubble.

Here’s what you should know about this tragic natural disaster.

1. There Were TWO Tornadoes

Photos from the ground depict a rare and terrifying sight: twin tornadoes, side-by-side, of equal size, both touching down and barreling toward populated areas. According to The Weather Channel, the National Weather Service issued a Particularly Dangerous Situation tornado watch before the tornadoes touched down in Nebraska. Meteorologist Nick Wiltgen explained the warning by saying:

A PDS watch means conditions are favorable for particularly strong and/or long-lived tornadoes, including tornadoes rating EF2 or higher on the Enhanced Fujita Scale. The PDS watch includes a large part of central and northeast Nebraska and a small portion of west-central Iowa.

The Enhanced Fujita Scale is a set of wind estimates based off damage sustained. An EF2 rating on the scale means winds are strong enough to cause damage to one-to-two family homes.

You can watch both tornadoes raging in the video above.

Two massive Tornadoes rip through Nebraska, looks like something out of "The day after tomorrow"… pic.twitter.com/QPBoFGuztc

2. The Damage Is Widespread & Devastating

Nearly the entire town of Pilger suffered destruction of property, but the southern half was utterly destroyed, reports the Journal Star, which likened the scene to a “war zone.”

The Omaha World-Herald quotes witnesses who said “cars are tossed” and “it’s a mess.”

You can see the full wrath of the storm as it sends entire homes airborne in the video above.

Praying for all those in Pilger NE as the tornado went through #hopeallareokay #NEwx pic.twitter.com/kEb39JT7qq

The Norfolk Daily News reports that the town’s post office, a bank and a church sustained severe damage.

Dispatcher on police scanner: "The whole town of Pilger is completely wiped out."

Several sources on the ground were describing the town as “leveled” or “wiped out,” including a dispatcher. It was not hyperbole. Eyewitnesses reported catastrophic destruction as far as they could see.

According to Ryan Kruger, who hid in a vault at his workplace when the tornado first touched down, the storm only took two minutes to nearly decimate the Pilger Store. When Kruger and his five co-workers exited the fault, all that was left of the store was one wall, according to the Norfolk Daily News.

Stanton County Commissioner Jerry Weatherholt listed many of the buildings in Pilger that were destroyed by the tornadoes when describing the damage. The Weather Channel Reports:

The co-op is gone, the grains bins are gone, and it looks like almost every house in town has some damage. It’s a complete mess.

3. At Least 2 People Are Dead, Including a 5-Year-Old Girl

According to the World-Herald, Stanton County Sheriff Mike Unger confirmed the tornado is responsible for the death of one child, a 5-year-old girl.

The number of injured has climbed to roughly 31, many of them critical, spread throughout local hospitals. Faith Regional Health Services in Norfolk reported 20 injured patients, 16 of which were in critical condition. Other hospitals, including Providence Medical Center in Wayne, a town 20 minutes north of Pilger, were under a Code Yellow, meaning they were preparing for “mass injuries,” KTIV reports.

@neiaredcross volunteers are responding. Our hearts go out to those affected in #Pilger. #NEwx #Redcross

4. The Governor Has Declared an Emergency

The American Red Cross has sent out tweets saying it is following the situation in Pilger and will be providing more information as it becomes available. The Red Cross webpage for Nebraska and Southwest Iowa has a link where viewers can submit donations, though it does not specify if that money goes directly to victims of the Pilger tornado. For now, the Nebraska and Southwest Iowa Red Cross has tweeted locations of shelters for those who need them:

5. Pilger Uses the Slogan ‘The Little Town Too Tough to Die’

According to the Pilger town website, it’s a village of 378 people, described as the “perfect bedroom community” to Norfolk, Wayne and Wisner. A month from now the village is slated to celebrate Pilger Days, an annual celebration that features a 32-team mud volleyball tournament.

According to the University of Nebraska at Lincoln, Charles and Mitchell Sharp were the first to settle in Pilger in 1865. After heading back to Omaha for the winter, the Sharp brothers returned with five new families to grow Pilger in the spring of 1868. The Elkhorn & Missouri Valley Railroad was built through Pilger during the late 1870s, and the town grew more and more prosperous until the invention of the automobile. Local businesses and professionals couldn’t compete with what was being offered in urban centers, so many of Pilger’s commercial entities moved out. Modern Pilger is still a vibrant and close-knit community, however, with farming and livestock acting as the village’s primary industry.

The website boasts the slogan, “The Little Town Too Tough to Die,” which carries new meaning on a day like this. 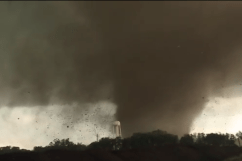 Pilger, Nebraska Tornado: The Photos You Need to See