We may all be caught up on what’s happening in the show, but there’s a lot more going on with the Pretty Little Liars cast you may not know. Some of our favorite faces from the show are engaged in real life, others are posing in sexy magazine spreads, and some are still surprised over the characters they were cast as four years ago.

Read on to find out all the PLL gossip.

1. Spencer is Engaged in Real Life

In February, E! announced that Troian is engaged to actor Patrick J. Adams, from the TV show Suits. Their romance began after working together in 2009 on Equivocation. They made their first red carpet appearance as a couple back in 2012 at the SAG awards.

Troian told People that their relationship is not easy– Suits films in Toronto and PLL in LA, so the two are constantly catering to one another’s schedules to get even a quick phone call in.

The two recently did a photo shoot together and they’re just as adorable as you’d imagine. What a power couple.

2. The Show Has Been Renewed For a 6th and 7th Season

The show is ABC Family’s number 1 series in history. It has attracted yields 3.8 million viewers worldwide, which explains the casts absurdly high number of Instagram followers.

It’s also the most tweeted television series of all time– receiving an average 675,000 tweets each episode.

Immediately after Shay sent in a tape for the role of Spencer, she found out Troian was cast as the part. She was then submitted for the role of Emily, which she said was a much better fit. Shay said said she knew from the start that she wanted to be on PLL, simply because of how cool the name sounded.

Two days after sending in a video of her audition for Emily, Shay got a call saying the network wanted to meet her. A week later, she found out she’d booked the role.

And as nuts as it is, Lucy Hale, who plays Aria, originally auditioned for Ashley’s role of Hanna. Weird to think what it’d be like to have our precious, sometimes ditsy Hanna replaced by Aria’s edgy and sweet self.

Sasha Pieterse, who plays Alison, was also cast interestingly. The blond beauty sent in her first tapes for the role of Hanna, while Janel Parrish, who plays Mona, was sent in for Spencer.

Season 5, Episode 5 is called “Miss Me x 100” and marks the 100th episode of PLL. According to Wetpaint, the episode will be about Alison’s first day back at Rosewood High. Weird to think that the girl we thought was a ghost will be strutting through the halls of her high school once again.

As Ali has to deal with being in high school again, those who have been hurt by her have to deal with her walking around the hallways– and it’s not easy for either party. Executive Producer Joseph Dougherty talked about what fans can expect.

Season five has a lot to do with figuring out allegiances in the new dynamic and how Rosewood is going to function when Ali comes back. It’s going to be about who you can trust.

A number of spoilers have suggested that Ezra may be winning back Aria. This isn’t too much of a surprise, as fans would go ballistic if the two were over for good.

Last season, Ezra and Aria had a very rocky relationship. But the brunette started to seem open to the idea of him after Ali talked about the night she died. 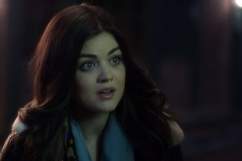 Loading more stories
wpDiscuz
0
0
Would love your thoughts, please comment.x
()
x
| Reply
There's a lot of on-set drama surrounding the Pretty Little Liars cast. Read on to find out what it's all about.