Ravshan Irmatov, the Uzbek soccer referee, is one of the highest regarded officials in the world. That’s why it only makes sense that he would be given control over one of the most highly anticipated games of the World Cup, the final group round match between USA and Germany. Above you can watch the official FIFA bio of Irmatov.

Irmatov wowed the crowed, and FIFA, with his evenhanded and efficient work in the 2010 World Cup but has garnered a little controversy for his card-heavy antics in 2014.

Of all of the many awards and accolades heaped on the Uzbek soccer instructor turned world-famous referee, the most prestigious is his being named “Asia’s Best Referee.” Irmatov won the award four years in a row, in 2008, 2009, 2010 and 2011.

2. He Tied the Record for Must Matches Refereed in a Single World Cup in 2010

At the age of 32, Ravshan Irmatov was the youngest World Cup referee at the 2010 tournament in South Africa. There, he tied the all time record for most games refereed during a single World Cup with five games. According to MLS Soccer, he was even given such prestigious games as the opener between Mexico and South Africa, a quarterfinal between Argentina and Germany, and a semifinal between Uruguay and the Netherlands.

3. He Issued 3 Yellow Cards & a Red Card in Croatia vs Mexico

Irmatov earned some ire from soccer fans, as well as the nickname “The Villain of Day 12,” when he gave away three yellow cards and one red card. In-between giving out all of those cards, he was also accused of missing two penalties against Croatia.

Uzbek referee Ravshan Irmatov assigned to U.S.-Germany match. His last one was Croatia-Mexico, where he missed two penalties on same play.

Irmatov began his career with the Uzbek league in 2000 and earned a coveted spot as a FIFA referee in 2003. With FIFA, his first major match was Vietnam vs Lebanon on March 31, 2004.

On Thursday at noon Eastern time, the United States will take on Germany in a match that determines whether they move forward into the Round of 16. USA will need to win or draw against Germany, one of the highest ranked team in the tournament, if it wants to move on.

If you don’t have access to a television, you can find out how to watch the game below: 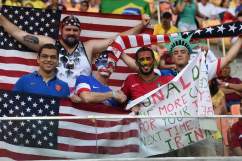