“Coming back to Rosewood is really hard for Alison. The girls aren’t sure if they can trust Alison, and Alison’s not sure if she can trust the girls. Basically, Alison brings in a tornado and wrecks Rosewood,” she told Zap2it.

Here’s what you need to know about the 18-year-old actress.

1. She Plays the Mean Girl

Since she plays such a vindictive character in Alison, people are always asking her what it’s like to portray such a mean girl.

In an interview with Sun Times, she said:

Honestly, it’s a lot of fun to play a mean girl. There’s something ridiculous fun about it. Everybody knows a girl like her — maybe not quite so exaggerated, of course — but that basic conniving kind of girl.

She is definitely having a good time acting bad:

In addition, Alison [her character] has caused so many ups and downs on the show and affected the lives of all the other characters — so that’s great to be a part of.

As far as what’s in store for her character this season, Pieterse said, “There’s things you’ll see from Alison’s past, from when she disappeared, that I never thought would happen.”

2. She a Country Singer

R.P.M. by Sasha Pieterse – Official videoBUY NOW – https://itunes.apple.com/us/album/r.p.m.-single/id654443181 R.P.M. is the second single from Sasha Pieterse. Available NOW on iTunes! Credits: Writer/Director/DP: Matt Steele Executive Producers: Sasha Pieterse, Dan Franklin & Matt Steele Music / MD: Dan Franklin Location Sound: Johnny Kubelka Grip: Hudson Sheaffer Makeup: Kristina Goldberg Hair: Jeanie Duronsiet Driver: Bill Diaz Wardrobe consideration by ThreadSence Equipment consideration by Carvin, Divided by 13, Orybon Drums and Hollywood Sound Cast: (in order of appearance) Guy: Alexander Suarez Sasha Pieterse: Herself Drums: Matt Davis Guitar: Dan Franklin Bass: Allee Fütterer Fiddle: Lauren Baba Special thanks to: Bill Diaz, Chance Glasco, David Dietz & David Hill LYRICS: Fast pace, day to day is the only thing that keeps me sane Blacktop beneath my wheels, blue moon rising above the hills Put it in gear, put the pedal down and I won't stop til the tank runs out Turning the ignition, revving up my engine, tearing up the highway of my life Grinding up my gearbox, skipping all the pit stops, blazing right by red traffic lights See, some folks like the slow lane… me? I just need the R.P.M.s Under the hood, you can hear the sound of a restless heart that can't slow down So much horsepower in my hands, baby try and catch me if you can No rearview mirror, and the brakes are shot, when life gets tough we kick it up a notch CHORUS In this crazy race of mine, there's no such thing as a finish line….2013-06-14T04:00:10.000Z

In 2013, the young songstress released her first country single, “This Country Is Badass.”

In the music video above, she’s singing her single “R.P.M.”

Although her Instagram page is filled with pictures of the mystery man, she never mentions him by name.

They are definitely in love, since she captioned a photo of them with:

Luckiest girl in the world…love you babe! You are my favorite person to celebrate with

4. She Loves Her Co Stars

The cast is extremely tight off screen, which the actress know is rare when it comes to girls.

But working with the cast has also been amazing. I think that’s what is so great about. We’re all such a cool, close family, and you don’t normally find that — especially on a set with a lot of girls! Let’s face it, women can be catty, especially in this business, but we found such a cool group. We all adore each other.

As the bunch goes on to discover who A truly is, Pieterse has a favorite theory:

My favorite has been that — it was something really weird about Courtney, my twin, if I still have my twin [from the books]. It was my twin Courtney was hiding in my lake house, and wreaking havoc somewhere.

5. She Was Born in South Africa

Like Charlize Theron, the actress was born in South Africa.

She came to the States when she was just a toddler.

At 6 years old, she landed her first TV role, in Family Affair, alongside Tim Curry and Gary Cole. 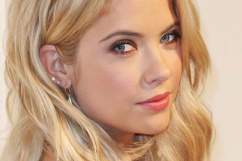