The San Antonio Spurs lead the 2014 NBA Finals series 2-1 after an emphatic win in Miami over the Heat. An amazing first half free-scoring performance from the Spurs helped set up the win. LeBron carried the Heat through the first two quarters but then disappeared in the second half, the same goes for most of his team mates. San Antonio was less dynamic in the second but were more solid in defense. The third period gave some hope of a dramatic comeback when the Heat cut the lead to just seven points at one stage. Eventually the Spurs, led by Leonard, Green and Tim Duncan, pulled away again to secure a memorable victory. Game 4 of the finals takes place on Thursday. Miami needs to figure out a way to stop the Spurs from scoring so freely.

Here’s how it went down on Miami beach:

Miami Heat fans are the worst:

What the hell is this?

Have you seen this man? (Getty)

Leonard has 28 points tonight, six more than LeBron has managed. Patty Mills is in for Tony Parker, doing a better job on defense.

On a night of offense, Kawhi Leonard just made the defensive play of the game. Just enough of a contest to throw off Ray Allen.

Allen seemed to have an easy layup but he missed it, Manu fouled on the rebound so will shoot twice from the free throw line. 5:40 to go, 5:40 left for Miami to get back in this one.

LeBron has had seven turnovers so far in this game. At 7:30, his turnover led to a bid driving dunk from Leonard.

Danny Green has been the Spurs star in the fourth quarter so far, keeping LeBron at bay, for now. Not to mention, Green has 15 points tonight. With 8:54 to go, Ray Allen hits a 3 that forces Popovich into a timeout. Also, Tony Parker needs to wake up:

Or maybe we should all still be talking about Leonard:

Just watched clip package of Leonard's defense on LeBron tonight. It's remarkable, coming up on broadcast.

Spurs are 40-0 this season with a double-digit lead going into the 4th quarter.

The Heat outscored the Spurs 25-15 with Dwayne Wade leading the way for Miami. Even still, San Antonio hold an 11-point lead going into the fourth quarter.

#HEATFinals: @DwyaneWade sinks a floater to bring Miami to within single digits! HEAT down 81-72.

Going into the fourth quarter with a single digit lead would be dangerous for the Spurs. Especially considering how tired the old boys from San Antonio look.

Spurs are crashing back to earth, they missed 14 of their last 24 shots. Tony Parker looks like the most exhausted man ever on the bench.

Check out this flop from Mario Chalmers, I mean, what the hell?

And then there was this from Mario:

The arena is coming alive as the Heat get to within 13 points of the Spurs. With 6:09 left in the third, Diaw (looking exhausted) draws offensive foul on LeBron.

Tim Duncan very lucky to get to he basket a 7 minutes, seemed to take an extra step. Manu has been disappointing since coming back in the game. Spurs need cool heads here.

Also at half time, we got to see some of Erik Spoelstra’s strategy:

The Spurs are holding strong early on but the Heat are coming into this game. Chris Bosh is doing his best to rally the weary crowd in Miami.

The Heat has heeded my advice.

#HEATFinals: CHRIS BOSH FOR THREEEEEEE! Spurs call timeout after Miami opens the 3rd on a 6-0 run, HEAT cut the deficit to 15 in 54 seconds.

The Heat need to come up big in the first six minutes of the third if they want to stay in this game.

At least somebody in the Heat defense has been paying attention. Some hope for the second half.

Looks like the first half will end with a free throw for Tony Parker after a Ray Allen foul with five seconds left. The Heat aren’t happy, they think Parker wasn’t shooting when he was fouled.

The Spurs are on the verge of the best shooting half in playoff history.

Jamie Foxx and Floyd Mayweather are there together. Anyone else think Jamie Foxx looks totally bored/petrified by Mayweather?

Spurs can miss their next 15 shots…and still be over 50 percent.

The American Airlines arena is starting to come alive as the Heat hit a few 3 pointers in quick succession.

Boris was pulled out by Popovich after giving up 2 straight 3 pointers to Lewis. Tim Duncan also back on the court, coming in for Splitter. Splitter has 6 points.

Kawhi Leonard and Danny Green … we call this basketball perfection (12 for 12!) pic.twitter.com/oJ4djIUe5n

The Heat need Ray Allen to start coming into this game. (Getty)

The Miami Heat has made 56 percent of its shots so far.

Now this was pretty cool from Patty Mills:

Erik Spoelstra looks like one stressed out dude tonight. (Getty)

I don't even know what I'm watching anymore.

The Spurs have stunned the American Airlines arena into silence, a 22 point deficit will do that.

San Antonio’s sensational shooting has propelled the Spurs into a 20 point lead, 16 from 18 in the field.

41 points on 23 trips (1.78 per). The Spurs' most efficient first-quarter of the Time Duncan era in the playoffs.

With less than a minute left in the quarter, the Spurs took a 15 point lead. An 11-2 run. The Spurs ball movement has been sensational. The first quarter finished 41-23 with a 3 at the buzzer from Ginobili. Basketball from a different planet for the Spurs. It seemed like it was San Antonio against LeBron for most of the first period.

Despite the shooting death of his friend, Young Chef, early this morning, Norris Cole is in the game.

Popovich calls a time out as LeBron sends in a three, taking him to 14 for the night. He scored the Heat’s last 12 points. Duncan has been too slow to get down the court to cover. Anyway, LeBron is shooting the Heat into Game 3.

Here’s a taste of how good Leonard has been so far tonight:

LeBron snaps a 9-0 run for the Spurs with a nice lay-up. Bonner comes in for Diaw on the Spurs side.

I've said it before, #Spurs Boris Diaw plays basketball unlike anyone else. Fun to watch, impossible to imitate. #NBAFinals

Kawhi Leonard has been all over the first few minutes in Miami. (Getty)

Kawhi Leonard tonight is reminiscent of his performances for the Spurs in Games 6 & 7 in 2013, efficient.

So far in this series, Kawhi Leonard has averaged nine points. He has seven here in the first four minutes. Just 30 seconds later Leonard made it to ten points. That move resulted in a Miami timeout with 7:22 left in the first.

Mario Chalmers has now turned the ball over twice in the opening few minutes. Worrying.

Nobody has missed a shot yet as Leonard goes up for a three-point play at 8:55

LeBron is switching it up defensively early on, been on Parker, Kawhi and Danny Greent all in the first three minutes.

Tim Duncan gets the first points of the night with a simple lay-up.

Julia Dale just belted out the national anthem and sent the crowd into a frenzy. That’s her 35-straight post season game singing it, not too bad kid, not too bad at all.

Not a bad seat, considering the price. #game3 pic.twitter.com/HBrROLjYJS

As the team’s are being introduced, the Heat’s Shane Battier greets our men and women in uniform.

We’re almost ready to go in Game 3 of the 2014 NBA Finals as the Spurs travel to Miami to face the Heat. The series is perfectly balanced at 1-1 and just to remind you, this is not 2013, this is 2014. A year has passed, it just doesn’t feel that way.

Stay with Heavy.com all night for live updates, videos, Gifs, Vines and pics. 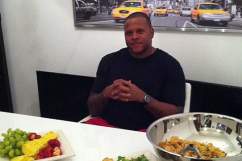 Read More
Basketball, Breaking News, LeBron James, Miami Heat, NBA, Sports
The Spurs and the Heat do battle in Miami in Game 3 of the NBA Finals. Follow all the action here live.