Staff Sergeant Ryan Pitts will be awarded the nation’s highest military honor, the Medal of Honor, on July 21, 2014. In July 2008, Pitts was seriously injured while defending a base single-handedly after his comrades died fighting an estimated 200 enemy combatants in Afghanistan.

1. Pitts Was Injured in the Battle of Wanat

According to the U.S. Military, in July 2008, Pitts was part of operation “Rock Move,” a mission to create a new base in the outskirts of a village called Wanat in northeastern Afghanistan.

Shortly after 4 a.m. on July 13, while standing guard at an observation post, Pitts came under fire by machine guns, rocket-propelled grenades and hand grenades. During this initial exchange of gunfire, two paratroopers with Pitts were killed, and he took grenade shrapnel in both his legs and in his left arm.

2. He Held off Around 200 Enemy Combatants When 9 Comrades Died

Bleeding heavily from his wounds, Pitts realized about an hour into the gunfight that he was alone in his position. Pitts continued fighting by holding onto live grenades for extra seconds before tossing grenades over the makeshift walls to ensure the insurgents couldn’t breach the wall or throw the grenades back.

3. The Battle Has Been Held Up as an Example of the Army’s Negligence

In the video above, a CNN investigation into the Battle of Wanat, you can see the soldiers digging in by hand around stone walls because the military contractor carrying fortification supplies never showed up.

According to the Washington Post, the soldiers arrived with limited supplies and amid reports that an insurgent attack was imminent. General Petraeus ordered an investigation of the incident in September 2009 after vocal concerns from the families that the military had left the men too vulnerable. The report found the officers were “derelict in the performance of their duties through neglect or culpable inefficiency.”

After ongoing medical problems related to his injuries from the Battle of Wanat, Pitts left the military in 2009. He returned to his hometown of Nashua, New Hampshire, where he lives with his wife and young son, Lucas.

According to the recent interview in the Army Times, Pitts now works in business development. 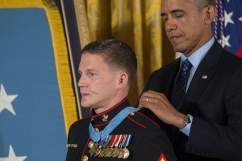 Read More
Afghanistan, Breaking News, Medal Of Honor, Military
Follow Heavy ↓
Ryan Pitts will receive the Medal of Honor for his bravery while injured at the Battle of Wanat in Afghanistan. He held off 200 enemy combatants after nine of his comrades perished.