The renegade co-owner of California Chrome took one final loud jab at the horse racing establishment Saturday night, trashing the sport’s rules and the horses who denied Chrome the Triple Crown in a sour-grapes rant on national TV.

Coburn, who has relished his role as an outsider and the owner of a horse who’s not a “Kentucky blue blood,” said in a post-race interview on NBC that horses who run the Belmont Stakes but not the Kentucky Derby and the Preakness — including Belmont champ Tonalist, who ran neither of the other two legs of the Triple Crown — took the “coward’s way out.”

The rant was probably the last moment in the spotlight for Coburn, who will return Monday to working the 6 a.m. shift at his factory job in Nevada. 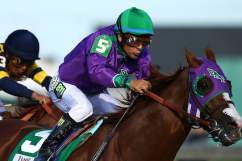