Abu Bakr al-Baghdadi has never traveled outside of Iraq and Syria, and now he controls much of those two countries.

Here’s what you need to know about the man who’s been called “the next bin Laden”:

1. His First Ever VIdeo Recently Surfaced

Unlike many high-profile terrorist leaders, al-Baghdadi shuns the public spotlight. Only two known photos of him exist, and al-Baghdadi has only appeared in one video, released on June 6. You can watch that video above.

Adding to his mystique is his skill as a military commander, and a mysterious biography of him that circulated on Jihadist websites. The text writes that al-Baghdadi got a Ph.D. from the Islamic University in Baghdad and has become one of the most prolific and well regarded preachers and educators in the region.

2. He May Have Been Radicalized While a Detainee in an American Camp

NBC reports that al-Baghdadi was believed to be a small commander of anti-American forces in Fallujah during the early 2000s until he was captured and brought to the U.S. detention facility at Camp Bucca in 2005. He stayed there until 2009, always behaving and proving himself a non-threat to the U.S. mission in Iraq.

One military officer at Camp Bucca recalls the day the charming prisoner was released in 2009. He reportedly turned to the New York-native guards and said, “I’ll see you guys in New York.”

A picture taken with a mobile phone in Mosul shows uniforms belonging to Iraqi security forces abandoned on the road as forces fled on June 10, 2014. (Getty)

Al-Baghdadi has been the driving force behind attacks on Iraqi and U.S. prisons holding al-Qaeda prisoners since 2011. The U.S. State Department reported in 2013 that al-Baghdadi took personal credit for the 2011 attack on the prison at Abu Ghraib, which freed around 1,000 prisoners.

Recently, as ISIL moved into the large northern Iraq city of Mosul, the group freed what the Washington Post estimates to be 2,000 to 3,000 “veteran fighters” from inside the prison.

Between smuggling, extortion and bank robbery, al-Bahgdadi is said to run the ISIL like an organized crime syndicate, setting up several streams of income to keep the organization well funded. NBC estimates the group’s assets to be at $2 billion.

After taking the city of Mosul, ISIL plundered the area’s major bank, coming away with an estimated $400 million.

5. The United States Has a $10 Million Bounty on His Head

The United States is offering a $10 million reward for information leading to al-Baghdadi’s capture. 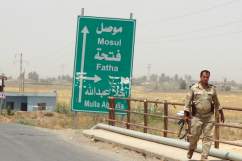 Loading more stories
wpDiscuz
1
0
Would love your thoughts, please comment.x
()
x
| Reply
He's been called "the next bin laden." Find out why Abu Bakr al-Baghdadi, leader of ISIS, may be our most terrifying enemy.